Indefinate detention of Women is a Humnan Rights Abuse

We wish we could be celebrating with you on this day, but we are not free to do so.

It is true that women have made much progress in the past century since the suffragettes won the right for some women to vote, but a hundred years does not negate an entire history of women being treated at best as inferior and at worst as property. We have a long way to go.

Today we celebrate what has been achieved, but we cannot take for granted the rights and freedoms that have been won.

We women here in Yarl’s Wood did not anticipate our freedom would be taken from us or the impact it would have. We are on a hunger strike because we are suffering unfair imprisonment and racist abuse in this archaic institution in Britain. This is a desperate measure due to desperate circumstances. We feel voiceless, forgotten and ignored. 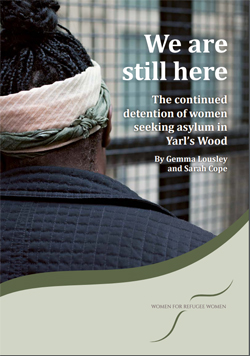 We needed a voice and more importantly we needed someone to listen. We needed to be reminded that we are human beings because trust us when we say most of us are so dehumanised by this process of detention and the way we are treated in detention that you start to forget.

Our protest started on 21 February, and is still going. In Yarl’s Wood we are on an all out strike; including hunger strike, a work strike and a refusal to use the health and legal services or the shop.

Our group are of mixed backgrounds and religions but we all have one thing in common, we are detained indefinitely! We are refusing food because we are outraged at the treatment we endure by the Home Office. We are not refusing food because of religious beliefs as they try to tell you but rather to demand our rights as human beings.

*
We want an end to indefinite detention and a return to the original plan of the 28 day limit.

*
We want the Home Office to respect Article 8.

*
We want the Home office to respect the European Convention of Human Rights regarding refugees and asylum seekers.

*
We want the Home Office to respect due process and stop deporting people before their cases are decided or appeals are heard.

*
We want due processes before we are imprisoned on immigration matters.

*
We want a fair bail process and the Home Office to end the process of selective evidence disclosure to the immigration tribunal courts and instead disclosure of all evidence to ensure a fair judgement is reached.

*
We want adequate healthcare and especially the mental health nurse to stop operating as an extension of the Home Office asking people such questions as, "did you know you were going to stay in the UK when you entered?"

*
We want the Home Office to stop detaining the vulnerable people, that is victims of rape, that is torture, all forms of torture, trafficking, forced labour, the disabled, the mentally ill and so on.

*
We want amnesty for all people who have lived in the UK for more than 10 years and an end to the exiling of those who came as children and are culturally British.

*
We want an end to the Home Office’s employing detainees to do menial work for £1 per hour. It prays on the vulnerable and forces them to participate in their own detention.

*
We want an end to charter flights and the snatching of people from their beds in the night and herding them like animals.

But today, one which we feel is also important is for the Home Office to recognise rape as torture and the fact that they won’t in itself just shows how far we have to go. 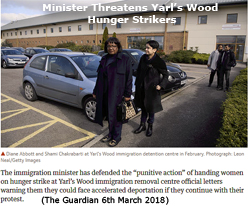 Many women in here are victims of sexual violence, trafficking and torture and this place is retraumatising them. This is against the Home Office’s own guidelines.

Even when the laws are in place often the patriarchal based society we live in does not guarantee equal rights. We are not judged as equals even today, in practice women still suffer gender biased in the work place, gender-based violence and so on.

That is why some people have come to the UK, they are escaping gender-based violence in the country of origin, they marry out of their caste and their families will not accept them; they face discrimination and violence because of their sexuality.

Yet they are being detained indefinitely with fear of being deported back to these situations.

The restrictions placed on women 100 years ago should never have been and today they seem ridiculous. Today, we should not be locked up because of our immigration status, and one day it will be seen for what it is: an unjust abuse of human rights.

I invoke the spirit of the suffragettes to help me every day I am detained and am hungry for freedom and we need to remember the sacrifice these women made a century ago so that we can have a vote and therefore have a voice today.

We urge every woman to use that vote to keep fighting to make our society fair for our daughters and for generations to come.

This statement from one of the women detained at Yarl’s Wood was sent to the Women for Refugee Women charity to be read at their International Women’s Day lobby of Parliament, and was published today in the New Statesman.