The confusion amongst the public about the NHS re-organisation and privatisation is about to get even worse as the new Accountable Care Organisations based on American healthcare systems, are being rebranded by Jeremy Hunt and the boss of NHS England in an attempt to get away from the argument that ACOs are ‘Americanisation of the NHS’, and to dismiss public opposition to them.

This point was first raised at a recent Health Select Committee when Labour MP Ben Bradshaw asked Jeremy Hunt why he had adopted an Americanism to name what was simply an improved healthcare approach of integrating hospital and social care.

The fact he was completely ignoring the delivery of these ACOs via private healthcare organisations being granted NHS service delivery contracts for a ten year period, was noted by many commenting in social media as tantamount to supporting the principle of Accountable Care Organisations, irrespective of the name used for them.

Furthermore, many see Ben Bradshaw’s second and final question to imply his support for the introduction of ACOs ("…why not call them ICOs?").


So ACOs are now being called ICOs – Integrated Care Organisations – but other than that; they are no different whatsoever in that the 44 areas of the NHS in England can be sold off to private organisations for a minimum term of 10 years, to deliver NHS services including of course; Social Care.

Whilst both Tory and the Labour leaders reject privatisation of the NHS and both use the phrase,
"The NHS will remain tax payer based and free at the point of delivery"; the public are quickly learning that this does not preclude NHS services from being delivered by private healthcare companies, organisations or ACO/ICOs!

The fact is that Integrated Care (Hospital and social care) does not require commercial contracts and the involvement of corporate and private healthcare companies such as those from the USA and the UK.

But once again statements such as ‘ we have the need for a ten year NHS plan’ are being used to actually mean handing over delivery of NHS services to private companies for a minimum of ten years! Not as the public understands it to mean ‘a ten year funding plan’!

Campaign groups such as 999 Call For The NHS have not been slow at slamming this game of words being played out by Hunt and his pals at NHS England:

"No doubt many campaigners will have noticed that local councils, STP Boards, Hospital Trust CEOs – any of the “partners” who are now involved in setting up Accountable Care Models – are busy telling us that there is nothing to worry about because they are not going to become an Accountable Care Organisation (that would be silly!)."

"Now the NHS England Cunning Linguist department has supplied local authorities and the STP partners with a whole new dictionary of absurd lingo to allay the fears of those pesky troublesome campaigners who are “ridiculous” to think that NHS England would dare to introduce a copy of the USA Medicare/Medicaid system.

This is nothing new in the NHS England box of tricks to distract, confuse and bamboozle the public, NHS Staff, local authorities and CCGs even MPs."

This last point is extremely relevant as even Labour controlled Councils such as Wirral Borough Council and Gt Manchester Council are busy setting up what they insist is ‘integrated care organisations’ and NOT privatisation of local healthcare.

In Manchester their ACO is being called a “local care organisation” formed between the group of providers, including Manchester University Foundation Trust, the city council and local GP federations.

This is happening in Labour Councils all over the country, despite the national and constituency Labour parties have voted overwhelmingly to oppose and stop Accountable Care Systems.

Here is a perfect example of what Labour Councils are doping without even realising or understanding the ramifications.

However, when you look at the fine detail – they are the ‘delivery of NHS services partnerships’ which will be ripe for the take-over by American Healthcare insurance companies once the Tories make a UK/US Trade Deal which will most certainly include the NHS and allow US companies to bid for and take over NHS services and ACO/ICOs.

Again 999 Call For The NHS has it covered: 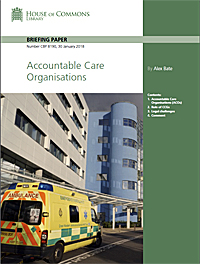 these are just smoke and mirror tricks to hide the fact that the path leads directly to the setting up (eventually) of Accountable Care Organisations. After all in 2017 all the 44 Footprint STPs (Plans or Partnerships take your pick) publicly declared their interest in moving towards the ACO model."

The House of Commons Library has produced a briefing document for MPs on the whole issue of NHS ACOs, but despite this and as with the Brexit briefing paper, there is the danger that few if any MPs have read it or are even aware of its existence.

But there is an even greater threat to the NHS as an entity and to the staffing of the NHS itself, resulting in the loss of tens of thousands of nurses and doctors to the NHS.

NHS Trusts across the country are now planning to, or already have, set themselves up as private limited companies and transferring the clinical staff over to these companies, getting rid of NHS pay and terms and conditions whilst doing so, and making themselves VAT exempt in the process!

These will then be non-accountable to the public, hide behind ‘commercial confidentiality’ and mean that not only will they be ripe to be taken-over by US healthcare, but when deaths ok due to cutting of services, use of non fully-qualified clinical staff and rationing of NHS services; there will be no way for the public to actually know what is going in their hospitals and GP practices!

"Combining multiple services into one contract risks the potential for non-NHS providers taking over the provision of care for entire health economies, as the contract would be subject to open competition rules. Moreover, a single ten-year contract would force re-procurement each time and create significant uncertainty.

The BMA strongly supports the ongoing provision of a publicly funded and publicly provided NHS, and calls for the government to clarify what safeguards will be in place to ensure that ACOs do not enable an increase in the role of independent sector providers in the NHS."

Many NHS supporting organisations and pressure groups are concerned that between NHS Trusts setting themselves up as limited companies, and the introduction of ACO/ICOs, there is now no doubt that the NHS is being fragmented and quickly destroyed!