The Asia Ban Asbestos Network (A-BAN) is seeking those exposed or suffering from asbestos related diseases such as victims groups and trade unions to sign their Open Letter to Asian Governments.

It is also seeking signatures from concerned scientists, researchers, doctors and specialists around the world, particularly those working in the field of asbestos disease and oncology.

Furthermore, there continues to be misinformation and confusion spread by lobby groups and individuals connected to the asbestos industry. Their target is governments who have not yet banned asbestos, mainly in Asia, in an effort to derail or delay a ban. 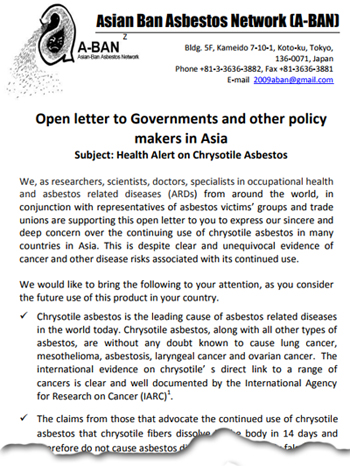 To counter this misinformation it is crucial that governments in Asia understand that the claims made by the asbestos industry are false.

Hence the need for the open letter beign sent to all Asian Governments and the campaign to support it.

The letter pictured right can be downloaded in PDF format and printed off if you wish.

Click on the pic to open the letter in full.

The way to sign the open letter reproduced below, is as follows:

Send an Email to openletter@apheda.org.au with a statement along the following lines:

The signatures will be presented to a range of governments in Asia in 2018 as part of the asbestos ban campaign so we can help prevent future cancers in Asia.

Please circulate to any appropriate networks, colleagues or organisations.