Four Manchester based CWU members are amongst 40 long-term BBC employees who are being forced into reduncdancy as a result of the BBC handing over the contract to IBM who are outsourcing the work off-shore.

The continued failure of the BBC to respond to repeated CWU demands for an explanation of the “dreadful” treatment dished out to 12 former Sopra Steria members has triggered the union to issue a formal complaint to the corporation’s governing body.

After waiting four months for the BBC’s human resources department to reply to both the initial request (and successive reminders) as to why a public service broadcaster had seen fit to consign a total of 40 long-serving workers to certain redundancy while senior managers openly bragged about striking “an excellent deal” for the corporation, the union delivered its blistering verdict to the BBC Trust 5th January.

In a hard-hitting letter to the body that ultimately judges whether the corporation is fulfilling its public service responsibilities, the CWU has urged the BBC to “take responsibility for its actions and not ignore the effects on working people its decisions have had”.

At the root of the CWU’s dispute with the BBC is senior management’s decision last year to terminate a longstanding contract with Sopra Steria to provide outsourced finance, accounting and payroll services, and to award the work instead to IBM.

IBM in turn subcontracted much of the work to two other companies – neither of which ever made any secret of their intention to handle the contract overseas, meaning that virtually all the former Sopra Steria staff were TUPE’d into an inevitable redundancy situation.

That process – already complete for the vast majority of Sopra Steria transferees – is now drawing to its conclusion for four Manchester-based CWU members. Adding insult to injury, while their redundancy was always inevitable, they’d been told they could not leave for other jobs until “knowledge transfer” was complete. 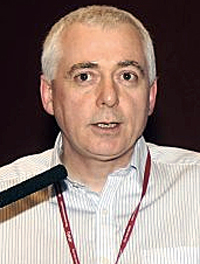 Lambasting the way in which, amid all the carnage, the BBC Director of Finance Ian Haythornthwaite had crowed about the deal in a self-congratulatory article on the BBC website, CWU assistant secretary Dave Jukes pulled no punches over what the union regards as advanced hypocrisy of the very worst kind.

Pointing out that there was “no reference whatsoever to the forty or so compulsory redundancies as a consequence of the BBC’s decision and that the work UK workers undertake for the BBC will largely be moved offshore.”

“The BBC and its journalists pursue politicians and people in industry amongst others for not telling the whole story or hiding facts.

I have to say that the BBC has behaved on this issue dreadfully and has not acknowledged the despair and anguish of UK workers being made compulsory redundant through a decision taken by BBC senior people these workers have families and mortgages just like senior people within the BBC.”

The CWU awaits the BBC Trust’s response with interest.