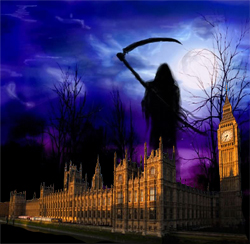 The nightmare that all Trade Unionists have campaigned against is finally approaching reality, and to put it another way, and in CWU DGS Tony Kearns’ words at the Retired Member’s Conference in January of this year:

"This mob that we’ve got in now will make what Thatcher did to the working class of this country seem like the magic roundabout. Make no mistake about it!"

The Grim Reaper, Theresa May stands over Parliament, with no opposition of any worth to stop her using her deadly scythe to slash through all worker’s rights, Trade Union rights, and the Triple Lock for Pensioners support such as free bus passes, winter fuel allowance etc.

By necessity Brexit will be swiftly followed on the same day as we leave the EU with with the abolition of the EU Social Chapter, EU protected workers rights through employment legislation being abolished/replaced; and the end of the Human Rights Act!

MPs of all parties have given her the sharpest scythe she could have wished for, as her death squad gathers to formulate legislation which will enable the end to all the hard won rights for the last 250 years that working people have had to fight for, with even some of them having to give up their lives via deportations and death. 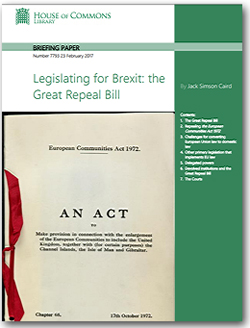 The Great Repeal Act and its implications have now been finally briefed to all MPs (who care to read it, unlike the majority that didn’t read the EU Referendum briefing) in a new document published in the House of Commons Library, under the aptly named ‘Legislation For Brexit: The Great Repeal Bill’.

This Bill will allow the Tories to hide, as they have done in the past, some of their worst attacks on the rights of the British people.

They will bury within the clauses of the Bill and add huge swathes of ‘enabling’ clauses which will escape the notice of most MPs; that will savage legislation which will no longer have the protection of the EU.

You can read the briefing document to all MPs by clicking on the cover picture above which will allow you to download the report in full. (pdf format)

If you believe as isngle word that unelected Grim Reaper May uttered about keeping worker’s rights, then this statement from the document should put paid to that!

The Government has announced that the Great Repeal Bill will repeal the European Communities Act 1972 (the ECA) and incorporate (transpose) European Union law into domestic law, “wherever practical”.