You will never see the truth of just what Trade Unions do in the Tory TV News media or read about it in the Tory press. 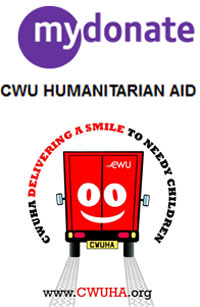 Nor will you see this on the 10 o’clock news, but right now, CWU members are making their way in the CWUHA May 2017 Convoy to deliver aid in the form of essential goods to the children of Moldova!

Communication Workers Union Humanitarian Aid is a response to the plight of vulnerable children in other countries and the UK & Ireland from trade unionists, families and friends, who work in Britain’s and Ireland’s postal, telecom & financial industries. 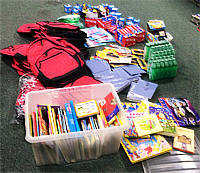 This year’s seven vehicle convoy to Moldova is packed with goods, toys and bedding for the children of villages in Moldova and driven by BT, and Royal Mail CWU members; with trucks donated by their employers.

An example of some of the type of items donated and delivered is pictured left.

These annual convoys have been traveling to other countries for over 20 years, relying as they do on the CWU’s charity the CWU Humanitarian Aid and the generosity of our CWU members and Branches across the UK, as well as regular donations and funds from charity events run by individuals and CWU Branches to keep the annual convoys going. 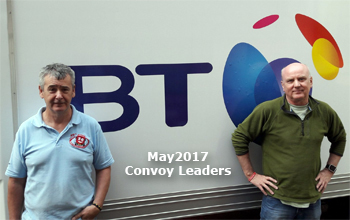 So effective is the charity that CWU member’s employees, Royal Mail and BT, continue to support the work of their Trade Union by loaning vehicles & supplying fuel.

You never see this being reported do you – two of the biggest employers in the UK working with their recognised Trade Unions in a partnership this May, to take aid to one of the poorest countries in eastern Europe!

The CWUHA is a unique charity because, it’s volunteers actually deliver the aid to the places where it is needed most. This way, Donors can therefore be confident that their generosity will be translated in to aid at the point of need!

Unique too in that they pay no wages or honoraria. The CWUHA office is also run at virtually no cost because thanks to the CWU and BT we pay no rent, no phone/email bills. All this keeps their office admin costs below 5%.

CWUHA has delivered thousands of tonnes of aid to hundreds of orphanages, hospitals, schools and direct to vulnerable families.

Some of the May 2017 Convoy Drivers and Volunteers

Though the majority of CWUHA’s work is focused on other countries the charity has raised and donated thousands of pounds to many good causes in the UK, including hospices, a holiday home for children with life threatening illnesses. CWUHA has also helped fund specialised operations and equipment for children in the UK and with your support CWUHA can continue in its efforts “to deliver a smile to needy children”.

Read what it is like on a convoy from one of the charity’s previous convoys from CWU Branch Officer of the Greater Mersey Amal, Angela Teeling here

Find out all you need to know about the CWUHA from their website cwuha.org

If you wish to donate to CWHUA now, click the link at the head of this news page to BT’s totally free Charity Donations website myDonate where 100% of your donation will go to the CWUHA.