Chlorinated chicken, GMO food, meat that is packed with hormones and growth inducing chemicals, and baby foods containing known carcinogens – are all on it’s way to our supermarkets if the Tory Government have their way in any trade deal with America.

Liam Fox, International Trade Secretary is currently in the US discussing a future trade deal with the USA which will also include agriculture and healthcare markets. he has pourted scorn over the objection to the lowering of food safety standards claiming that lowering UK food standards to allow the import of chlorinated chicken from the US is an insignificant detail. 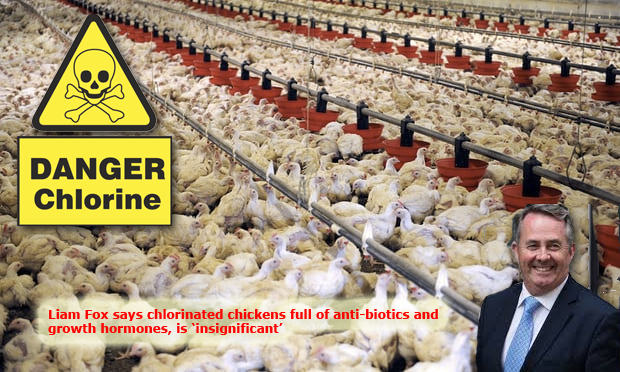 Furthermore, American factory farming techniques such as the no grazing of cattle, GM crops, growth hormones and huge industrial farming; is poised to take over British agriculture by US farmers who view food as a mere commodity of profit without concern for the safety of the food they produce. And in a recent BBC  documentary, it was clear that American farmers are poised to enter the UK and take over our farms and reduce our animal welfare standards.

But there is far worse than chlorinated chickens on the horizon for Britsh consumers:

Chicken rearing companies in the US use a wide array of antibiotics as routine feed supplements to prevent disease and promote growth. That is one of the reasons why antibiotic-resistant superbugs are on the increase! These anti-biotics can includes one that is crucial to human health, says the US Food and Drug Administration.

The poultry is also dosed with antihistamines, to make their meat more tender, reports The Guardian newspaper: "Some carcasses have tested positive for residues of steroids and ketamine. There is evidence that a hormone injected into US cattle to fatten them more quickly may increase the risk of breast cancer. And all this is before Trump completes his assault on the US regulatory system." 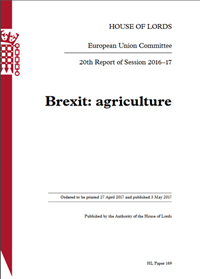 Coincidentally, a House of Lords report makes it clear that the standards of UK food producers could be compromised by other countries demanding we allow an influx of cheap and lower-standard food as part of any trade deal.

Yet direct from No 10 the PM’s spokesperson stated that imports of US food products containing chlorine etc will not be ruled out in any trade deal. Consumers will never know what is in the US food imports because the US regulations on labelling have been watered down by farmer’s lobbying government.

Whilst the EU has strict laws with regard to the likes of GM foods, hormone growth and animal welfare on farms, the UK itself relies on protection for consumers through EU food standards as part of UK laws which will be ditched after we leave the EU as part of any US/UK trade deal.

Many believe America will insist on the abolition of these and the Tory Government, desperate for any trade deal with any nation will succumb to the American way of minimum regulation and the principle that everything is safe unless otherwise proven – no preventative strategy at all because that is seen as an attack on free enterprise and company profits.

Indeed, Tory Governments have always been against regulating business in any form and has objected to nearly all regulatory directives in the EU parliament and council of ministers. Further, it has campaigned in the EU for the withdrawal of existing regulation including food safety, health and safety and financial services regulations.

The EU precautionary principle – namely, putting appropriate measures in place until a proper risk assessment has taken place – has served UK consumers well, and should be continued when the UK leaves Europe, said Sue Davies, chief policy officer at Which? Adding that it is “absolutely crucial” that the UK continues to adopt a precautionary approach to food safety post­ Brexit.

The former chair of the management board of the European Food Safety Authority (EFSA), was addressing delegates at a Food Manufacture’s food safety conference in October 2016 – Boosting consumer confidence in times of change.

“Obviously, it’s very difficult to talk about what the complexities of Brexit are, because we’re not completely clear of what sort of relationship we may or may not continue to have with the EU,” she said.

“However, we need to make sure that the consumer protection we get through the EU body of legislation is maintained. If you put short ­term interests first, then it will only hit businesses harder in the longer ­term.”

Current food law regulation means that the UK has a high level of consumer health protection – one that placed responsibilities on business, but also recognised the role of competent authorities.

“We have a precautionary principle, which means where we have scientific uncertainty, it’s appropriate to put in measures until you’ve done a proper risk assessment. And it’s absolutely crucial that we maintain that approach,” she said.

She expressed concern about the Food Standards Agency’s (FSA’s) capacity to take on extra responsibly once we have left the EU, saying:

“There might still be a way we can linked into that European regulation, but it still raises a lot of issues about risk assessment capability with the FSA. The FSA’s scientific committees serve quite a different function than they would as part of a food approval process.”

She also made it clear that the National Food Crime Unit – set up by the FSA to fight fraud and unsafe practices within the supply chain must be preserved and  take on a greater investigatory capacity. She believed it was important that the unit remained within FSA as set out in the Elliott report into the horsemeat scandal.

“If food crime leaves the FSA and gets mixed up with other crime, then it’ll never get the kind of priority it should.”  she argued.

But the current talks with the USA led by Liam Fox has caused a row within the Tory government with opposition to Fox’s attitude that things like chlorinated chicken will be allowed and poses no threat to our health; makes it apparent that our food standards are at risk from post-Brexit trade deal negotiations, with some terrible consequences for our health.

Fox’s stance makes it clear that the UK Government will allow lower food standards to boost corporate profits with dire consequences for the health of the public.

The EU has strict rules on which food products can be imported, necessary when you consider that, for example, Pork in particular is highly regulated due to problems with tapeworm infection across the world. When passed on to humans this tapeworm can cause very severe health problems, and even death. 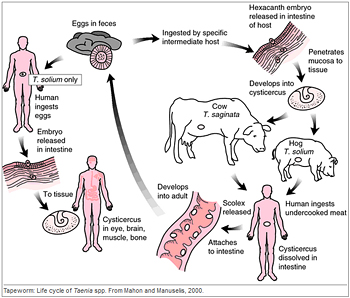 It is estimated that up to 37% of pigs in some parts of the world are infected, which is why right now the EU puts very strict conditions on imports. Big business is now eyeing up the ‘opportunities’ from Brexit, which mostly means reducing their costs by any way possible to boost their profits – even if it risks the health of consumers.
Even more worrying is GMOs, hormone-fed beef and Ractopamine – a muscle builder given to pigs and turkeys – are all commonly used in countries like the USA, with which the UK Government wants a post-Brexit trade deal.

The EU bans them through its ‘precautionary principle’, which means if there’s even the possibility of a risk to human health then they can’t come in. The UK has no such protections on its own, and with the likes of Liam Fox in charge of any trade deal, you can almost guarantee, this approach will not be part of any UK/US trade deal.

But, it gets worse warns organisations such as the Sum Of Us and the BBC in it’s recent documentary on American farming and beef rearing practices. It featured cattle that are never grazed and stand all day in concrete ‘warehouses’ with latticed concrete flooring and fed on grain full of hormones and made from GM crops.

Lower food standards mean lower animal welfare protections. Battery farmed chickens, sow stalls and veal crates are all prohibited by EU rules. These farm practises are nothing short of animal cruelty, but again they are used commonly in countries like the USA.

Interestingly enough, the outcome of the EU referendum would be reversed if it was held tomorrow, a new poll  – The Survation survey; suggests.

It showed a clear majority of Britons (54%) would vote to Remain in the European Union if another referendum was held while 46% would back Brexit.