Three days ago, The Daily Telegraph reported that the largest employees pension scheme in the UK was on the verge of being closed down by BT, as more UK companies copy the Tory mantra of pitting generation and against generation. 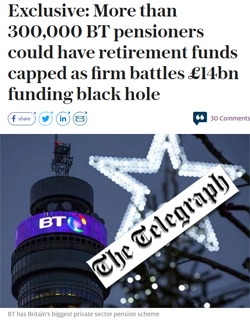 They blame this country’s pensioners for the lack of sufficient funding of schools, student fee increases, the lack of house building, and even food banks!

"So now pensioners are to blame for BT’s inability to expand broadband services. Extraordinary!"

Meanwhile, Angela Teeling Assistant Secretary T&FS for Grt Mersey Amal Branch took to her mobile phone and texted the headlines and link for today’s Guardian newspaper report of the intent of BT to close its pension scheme in it’s current form.

"Hundreds of thousands of BT pensioners are in line to have their retirement pots capped as the telecoms giant battles the massive black hole in its £50bn fund.
BT is appealing to the fund’s trustees and telecoms unions to agree to end accruals in its defined-benefits pension scheme. It has more than 300,000 members and is the UK’s largest private-sector retirement fund."

The ‘extraordinary’ bit Graham was referring to came next:

"The scheme was closed to new entrants in 2001 but existing members are still building up benefits that BT fears are becoming increasingly unaffordable and threatening its ability to invest in broadband upgrades."

But the true hypocrisy of the company is clear when you read this: 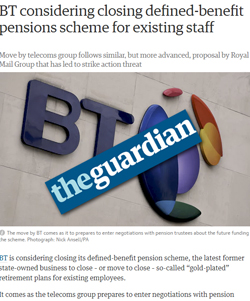 "BT is also expected to argue that continuing to build up pensions for older workers that are already significantly more generous than those available to younger members would be unfair."

Given that it was BT who decided to introduce a new, less favourable scheme for new staff, this statement from the Telegraph, if true, shows the depth of Tory government policy and practice that is now embedded in British industry – the blaming of one generation for the ills of the other which are forced upon them by employers and the government!

The article goes on to report that:

"At the last formal valuation, BT’s pension scheme had a shortfall of £7bn. The company has agreed top-up payments of up to £500m a year until 2030 to plug the gap."

Today (30th May) The Guardian reports that the scheme will close and that BT is in talks with the BT Pension Trustees concerning the future of the scheme.
It adds:
" It follows a similar, but more advanced, proposal by the recently privatised Royal Mail Group, where plans to shut its defined-benefit pension scheme to existing workers next year has resulted in threats of strike action."

It then quotes BT:

A BT spokesman said it would be inappropriate to comment on the details of its forthcoming pension review, but added: “We are starting discussions with the trustee of the BT pension scheme about the triennial valuation.
“We don’t expect this process to be completed until the first half of 2018 at the very earliest.”

The CWU is yet to publicly respond to these reports, but it is clear from the stance taken by the Union’s Postal Executive, that the Telecoms Executive will possibly respond in a similar fashion.

You can read both newspaper reports by clicking on their pics above.

Source: The Guardian / The Telegraph