Members across BT have voted to accept the company’s ‘full and final’ pay offer of 2.6% – a settlement which is backdated to January, fully consolidated and above the relevant (December) Retail Price Index (RPI) inflation rate of 2.5%. 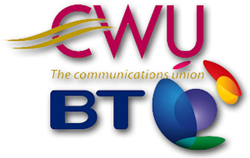 The CWU-brokered deal – which had been unanimously recommended to members by the union’s BT Executive Committee – received 70% backing from NewGRID (including Workforce 2020) grade members (on a 57% turnout) in a consultative ballot that closed yesterday (April 11).

The emergence of an offer that the union felt able to put to members followed the breaking of a tense stand-off in talks stemming from BT’s earlier insistence that RPI was “out of date”, irrelevant and unaffordable.

An earlier company offer of 1.8% had been summarily rejected by CWU negotiators in January, with the union warning that management should not take the huge contribution made by CWU members to the company’s success for granted.

Commenting on the pay settlement – which responds to CWU concern about the pay gap between those recruited before and after September 1, 2014, by giving Workforce 2020 grades an additional consolidated £120 uplift on top of the 2.6% increase – deputy general secretary Andy Kerr said:

“I’m absolutely convinced that we pushed BT as far as we possibly could, and that the settlement we’ve achieved is the very best that can be secured by negotiation.

Although discussions between the CWU and BT over whether to use CPI or RPI as the appropriate inflation measure were fraught – at one stage reaching complete impasse – we stood by our guns and are pleased that we’ve secured an increase that is above the December RPI figure for everyone.

Additionally the negotiating team had a mandate from last year’s Conference to use this pay round to start to close the pay gap between Workforce 2020 grades and those employed prior to September 2014 – something this settlement also achieves.”

Other key elements of the deal include:

* Allowances that automatically increase with pay will increase by 2.6% as well as the Scottish Distant Islands allowance

*For Team Members that are NewGRID grades and members of the BTPS (defined benefit pension) 0.7% of the pay increase will be categorised as pensionable

Because of the complexity of the pay deal, and the system changes required, the CWU has been informed that the pay settlement will not be possible to implement before the pay cut-off date for April, but will be backdated to 1st January 2017.