Clive Lewis Labour Party’s shadow secretary for business, energy and industrial strategy, and Labour MP for Norwich South has written this week in The Huffington Post regarding the sale of Royal Mail.

In the short blog posting he points out that:

"Royal Mail is 500 years old this year, an anniversary marked with some fanfare last month. Today however, is three years since Royal Mail was privatised – and this is an anniversary we’re unlikely to be hearing much about.

The government has good reason for keeping it quiet because the sell-off of Royal Mail is a damning indictment of its approach to key industries and public services." 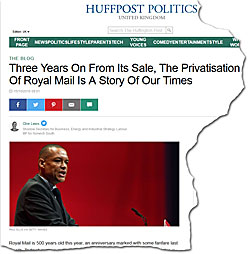 He then goes on to look at the impact on postal service:

"The Post Office was split from the profitable Royal Mail business in order to pave the way for privatisation – and all too predictably it is now at crisis point. This year alone it is shedding 2,000 jobs and closing down flagship branches across the country.

Similarly, in a privatised Royal Mail 11,000 jobs have been lost, a fifth of its mail centres have closed and 5% of its delivery offices have shut with more due to follow.

These things are not just down to privatisation – but shareholders are exerting more and more influence to maximise their own profits.

As a sign of these shifting priorities, while staff are constantly seeing their workload increase and face the threat of the pension scheme closing, Royal Mail is paying out dividends of £220m per year. "

Pointing out that all users of RM services are paying the price for this, he said:

"It’s not just staff who will question the wisdom of this. As mail users we’re the ones paying the cost. And as tax payers – given that this dividend would pay for thousands of teachers or nurses every year – the idea we were better off rid of Royal Mail could not be further from the truth.

The key argument the government used to justify the sell-off was that Royal Mail had to be a private company so that it could access private capital. This was always a fallacy – Network Rail, for instance, is in public ownership and has always been able to undertake significant borrowing.

But what we have seen over the past three years further exposes this lie. Put simply, with Royal Mail on course to have paid out £650million in dividends over this period, the truth is that privatisation has seen more money flowing out of Royal Mail rather than into it."

"So just who did benefit from the sale? The government famously took a different approach to the conventional idea that you might sell to the highest bidder. Instead it followed the advice of financial institutions – which themselves bought into Royal Mail – in naming its price.

It sold the shares at 330p and within a day the share price stood at 455p. At the time of course, the government said the valuation would ultimately be proved right. But with the average price since then having been even higher at 486p, the government effectively gave away £1billion in public assets to those who already had money going spare."

"It’s sad to say, but the story of Royal Mail’s privatisation is a story of our times: the loss of democratic control; the transfer of wealth and power to the richest in society; and the growing pressure on working people to work harder and faster for less.
So it’s clear why the Tories won’t be shouting about the third anniversary of the sale – because it serves to underline the need for fundamental change in this country. And the most important change of all in delivering this, is a change in government. "