The CWU is campaigning against the undemocratic and unnecessary Trade Union Bill, and  will be announcing a range of events and activities in the coming weeks where we will be calling for the support of our Branches and Members.

Today, the Trade Union Bill will be debated in the House of Lords. Please take the time to read this information below and watch the video both of which have been produced by Unions Together.

The Tories want to be in power for a generation, and are fixing the system to make that happen. They’re making it harder to register to vote, and are redrawing the Parliamentary map in a way that benefits them.

But that’s not all. Hidden in the Trade Union Bill is a clause that is deliberately designed to cut off trade unions’ financial support for the Labour Party – while doing nothing to limit the hedge funds and millionaires that support the Tories. This will create an overwhelming funding imbalance in our political system overnight. 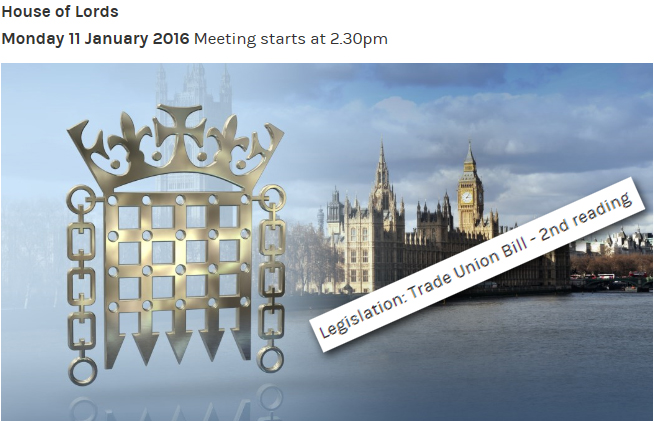 There’s lots of opposition to the Bill in the Lords, but we need to spread the word about what this Bill really means for our democracy. That’s why we’ve made this short video with Angela Smith, Labour Leader in the House of Lords, explaining what the Bill does, and why we need to oppose it.

You can watch the debate direct by clicking on the pic.