The Post Office has today announced that it is to close and franchise a further 37 of its flagship Crown office branches, with a loss of an estimated 300 staff, and cut 127 Financial Specialist roles across its network.

On top of the sixty two branches announced for closure and franchise in 2016, the 400 plus job cuts brings more misery to Post Office workers and the customers they serve.

“The latest round of closures is further evidence that the Post Office is in crisis and that the board of the company, backed by the government, is simply pursuing a strategy of slash and burn.”

Commenting on the public response to the closure programme, he added:

“Today’s announcement comes less than three weeks after the closure of a major government consultation on the future of the Post Office and sticks two fingers up to everyone who took part in this.

75,000 postcards were returned to the government signed by members of the public calling for an end to the closure and franchise programme – the Post Office and the government have completely ignored their views.”

The CWU General Secretary concluded by referring to PM May’s comments on society:

“While the government spent yesterday talking about building a shared society today’s announcement pressing on with the destruction of yet another public service shows we are reaching the point where we will have little left to share.

The CWU will not accept this and we will be stepping up our political and industrial campaign to fight for the future of the Post Office.” 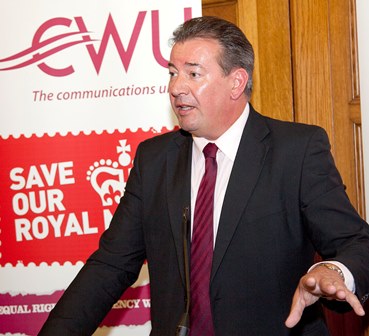 “The arrogance of the Post Office and Government is stunning, the Post Office network has been reduced by more than 50% over the past 30years and continues to be run down.

It requires a proper business plan for growth and investment which is being ignored.  Its IT platform is being held together with sticky tape and it continues to outsource and close its outlets, yet they dress it up as success and honour its directors."

In a commetn which coudl easilly ahve been about the EU Referendum campaign,
Terry highlighted the current tactics of the Post Office:

“A con is a con regardless of how it’s dressed up and the British public and our members are being conned on a grand scale into believing that a Post Office without modern new products and services, and the right investment can survive.

Shame on them and have no doubt our loyal members who have served the British public most of their working lives have every right to protest and we will continue to support and lead them. "

In conclusion he promised:

“The CWU will not stand back while the Post Office cuts hundreds of jobs and is being put on a path of managed decline, if you value your Post Office then support our stand. The loss of a further 127 Financial Service customer advisor roles underlines the complete lack of strategy for the future of the Post Office. If the Post Office wants to resolve this dispute it has to think again and change course as a matter of urgency.”

The Post Office board’s announcement of the privatisation of a further 37 Crown Post Offices resulting in a potential 370 job losses, comes on top of a series of recent announcements including: