He spoke primarily about Motion 29 and said the time was right to have a debate about the roll of Retired Members within the CWU. Not just the RMAC but other Retired Members too. He acknowledged that the union had probably developed a mindset whereby we’d ticket a few boxes.

But Dave Ward and himself had decided they wanted to do more and that’s how Motion 29 was written and submitted to Conference. It’s about finding out what 15000 Retired Members want from the union.

He explained the differences between those who are fully retired and those who are Portability members and how it came about when BT were shedding staff in the early 90’s. They were leaving BT, finding employment elsewhere but did not want to give up their union membership. It enabled the union to gain access to companies where we wanted to gain recognition. So it was a win, win situation.

The union retained the knowledge and experience of older members who were willing and able to get involved in campaigns and demonstrations. Over the years that situation has drifted away. Some people now choose to become Portability Members rather than Retired Members when they reach retirement age. This enables them, within the rule book to hold officerships which are denied to Retired Members.

So we now need to find what we need to do for Retired Members and what Retired Members activists can do for the union, how they can get involved in what the union does. That was the logic behind Motion 29 and is the dynamic of how we engage with Retired Members. We will fully intend to carry out the terms of the motion and come up with a solution that develops the involvement of Retired Members.

We were given a presentation by people from UnionLine which centred on the availability of the free Will service and their ability to offer Lasting Power of Attorney service.

Simple wills are available free of charge. The individual member needs to contact UnionLine direct as, initially, they need to establish what is required so the correct forms can be included in the pack sent to the member. For this reason branches cannot request multiple packs. Once the forms are returned they are checked by a legal advisor, registered and a copy sent back to the member. The service is available to the member’s spouse or partner too. 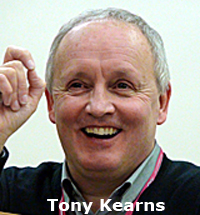 If the will is complex e.g. a trust fund is required or if Inheritance Tax would be due then the process would be handled by a panel solicitor such as Simpson Miller and a charged would be made.

UnionLine offers the least expensive service regarding Lasting Power of Attorney apart from do it yourself on line with the risk of mistakes being made. There are two kinds of Lasting Power of Attorney, financial and health. In both cases they need to be registered at court for which there is an additional fixed charge. Once again the service is available for spouse or partner.

The session was then opened up to general discussion. Motion 29 Portability Membership and the rule change regarding the status of Retired Members created a lively debate but, unfortunately, I had to return to the Conference Hall.