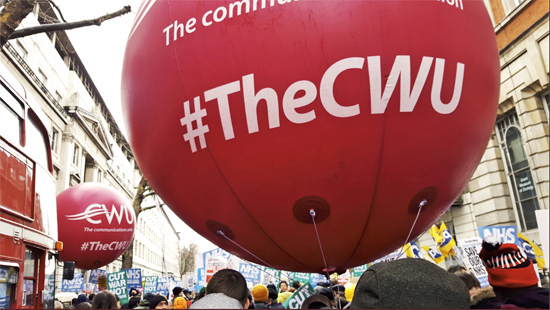 Rain and winds and cold weather never stops the CWU and its Branch activists when it comes to fighting back against a government that simply intends to destroy public services, and especially the National Health Service! 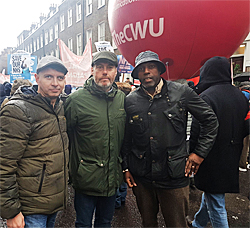 Today’s demo was organised by the People’s Assembly with tens of thousands of people attending from across the UK to march from Gower Street to Downing Street in London.

Never before since the NHS was created by a Labour government, has the service been under such attacks from the Government.

Using austerity as an excuse, it has since 2010 systematically handed the NHS over to private healthcare companies with billions of pounds of tax payer’s money handed over in the form of contracts to deliver NHS services, to such companies as Virgincare, Circle Health, Carillion and Capita.

Dr Lauren Garaghan who is a NHS hospital doctor made this very clear when speaking at a Labour Party rally in defence of the NHS on 25th January:

The old smokescreen quote being spewed out of the mouths of the Tory PM Theresa May and of course Jeremy Hunt whenever NHS Privatisation is mentioned, hides their true intent!

"The NHS will remain funded by the tax-payer and be free at the point of delivery!"

But of course they are telling the truth of their intent – well sort of!

Just like the Railways, billions of pounds of tax payer’s money for the NHS, will be paid out to private companies, including those from the USA following a post-brexit UK/US trade deal; to provide what was in-house NHS services.

Wholesale privatisation of UK healthcare continues slowly and surely as the public are blinded by the phase above.

Meanwhile as the 60,000 plus marchers headed to Downing Street, the BBC News channel, both on TV and on the web, ignored the outcry from the public over the Tory Government’s drive down of the NHS into the hands of profiteering private healthcare providers and ignore too the outcry in the country about the current NHS Crisis.

Instead they ensured such brilliant news items as those in the pics below are covered, finally around 5:45pm giving in and reporting two very short pieces on the BBC News website and far smaller than the space given to trivia dumbed-down celebrity news.

But checking out the website an hour later – and it had all but disappeared with no direct link from any of the news pages, apart from a 1.5 minute video that didn’t even headline that it was taken at the demonstration. 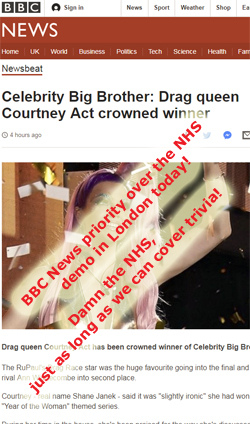 No mention of course of Jeremy Hunt’s current re-organisation of the NHS into US-Style Accountable Care Organisations and the fragmenting of the NHS in England into 44 separate ACOs in the exact style of US Healthcare which will put control of NHS budgets and therefore health policy into the hands of private healthcare companies.

Following Brexit and the forming of a UK/US trade deal that the Government are desperate for once we leave the EU, the NHS will be part of it and will turn the NHS from a publically accountable health service, into a private health service protected from public scrutiny by ‘commercial confidentiality’. Branson’s latest payout after sueing the NHS for not being granted renewal of an existing contract; is a typical example of Billions being drained from NHS budgets with no responsibility to divulge the details!

In case there is any dubiety, this website has previously reported on the facts around Accountable Care Organisations, with very latest on legal; action taken against Jeremy Hunt in his role as Secretary of State for Health and Social Care.

Furthermore, the Naylor Report which talks of selling off NHS properties and land, continues to be quietly implemented by Hunt and NHS England – all behind closed doors and hidden from the scrutiny of Parliament of course!

Check out the new pages and news archive for further details. 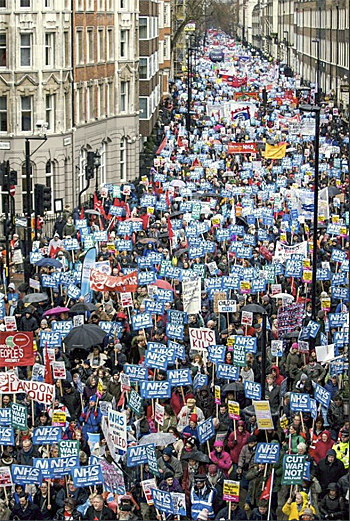 So just how has today gone on the streets of London?

Chanting, music and plenty of humour in delivering a very stark and important message to the Government and indeed to the world as well as the people of England. 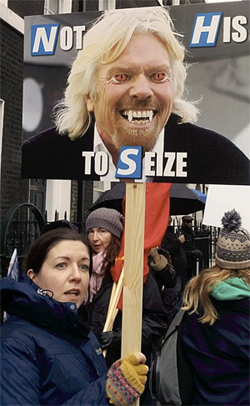 The message from the CWU attendees at today’s march is quite clear:

It is time this Government stops blaming patients, nurses, doctors, immigrants, flu and the elderly for their shortcomings. It’s time they start listening to the country who is sick of empty promises from the mouths of cowardly politicians.

The Tories must heed the call of the public, staff and patients alike who demand that #our NHS is not only funded properly but brought back into public hands away from the waste and demands of shareholders and bankers’ bonuses.

On the 70th year of the NHS we created – we demand that #our NHS is given back! We must end the NHS crisis now. 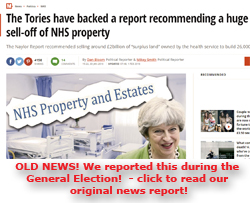 With mainstream media only just starting to report what really is going in the NHS comes a news item this website published during the General Election with regard to the sale of NHS hospitals, land and property.

This despite the fact that Theresa May spilled the beans by accident in an interview with Andrew Neil. Probably because she was so comfortable with the BBC Daily Politics presenter who was once at News International during the 1980s print workers strikes and who is a die-hard Tory supporter given his background of working for Rupert Murdoch and over seeing the Wapping dispute; and the obvious bias tone of his programme and that of his colleague Jo Coburn. 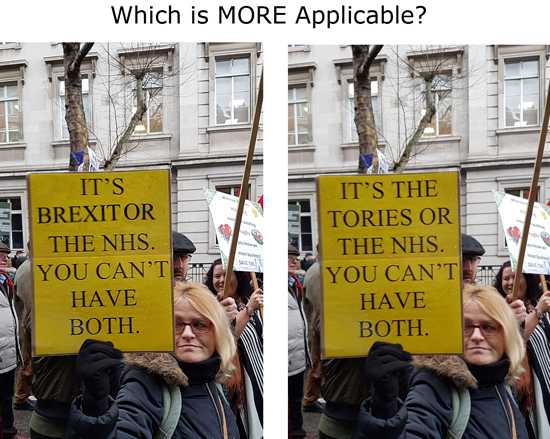