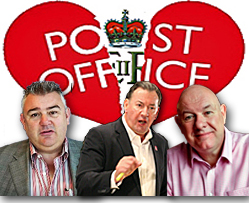 Last week’s National Briefing in London saw the re-launching of the Union’s campaign in defence of a bleak future for the Post Office.  Dave Ward, General Secretary, Terry Pullinger, Deputy General Secretary (Postal) and Andy Furey, Assistant Secretary addressed the briefing to elaborate on the industrial and political strands of this dispute and the new initiatives planned and agreed by the Postal Executive going forward.

All three CWU national Officer’s have written the latest letter to branches following that meeting which focuses on the specific issue of Community Campaigns against franchising of Crown Post Offices.

Further to the announcement of Tranche 3 (37 Crowns) on 10th January 2017, it follows that we now have 68 Crowns that the Post Office has earmarked for either franchising or closure. If the Post Office was able to find partners for all of these Crowns, this would potentially mean 700 less members.

So the reality is, community campaigns against franchising, if successful, would secure 700 of our members’ jobs in the Post Office.  Clearly this makes this issue exceptionally serious.

In respect of campaigns against franchising, it has been proven that the best way to save a Crown Office is to have a robust community-led campaign in order to deter potential franchising partners.

This was evident when in February 2013 the Post Office announced the franchising or closure of 70 Crown Offices but failed to find partners for 21 of these.  They remain Crowns today and this demonstrates that local campaigns can be effective by deterring potential franchise partners.

It is essential this union at all levels does everything we can to defend and protect jobs in the Post Office.  In this regard the participation of Branches is fundamentally key, particularly when it comes to involving local groups and the community. 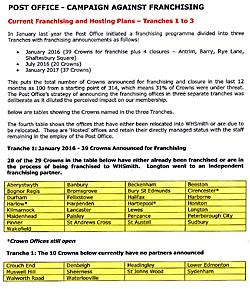 The letter to the left (handed out at the briefing) contains a summary of the Post Office’s current franchising and hosting plans and a list of the 67 Crowns which do not yet have a franchise partner announced. Click it to download the handout in PDF format

It is these 67 Crowns (plus the proposed Antrim closure) where we have a real opportunity to protect the Crown status and our members’ jobs via effective and vigorous local campaigning.

At the end of the attached summary is a list of 68 Crowns (including Antrim) by Union Branch so you can quickly see which Crowns fall under your Branch remit.  It is vitally important that Regional Secretaries, Branches and IR Representatives coordinate and organise community-led campaigns for these Crowns.

Public meetings should also be instigated at the earliest opportunity.

Refreshed Campaign Pack – Save the Heart of the High Street

Our campaign pack providing Branches with considerable guidance and direction in respect of local community campaigning has been updated and was distributed at the two National Briefings last week.  Included in the campaign pack are the following documents:

A Word version of the letter to MPs is also available on request for you to modify/tailor to relate to the particular Crown(s) in your area.  Copies of all campaign materials including posters, leaflets etc. which can be tailored for local use are available on request by emailing Lea Sheridan – lsherdican@cwu.org.  Please allow ample time for the design and posting of materials as requests are processed and distributed via our Communications department and our in-house designer produces material for all departments. 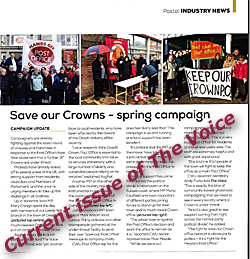 It is of paramount importance that community campaigns are instigated everywhere that a Crown Office is under threat.  This campaigning must also include local politicians and where appropriate should also include community-led boycotting of potential franchise partners.

In the latest edition of The Voice, on page 13 is a campaign update under the heading “Save our Crowns – Spring Campaign”.

The article highlights some of the activities already underway whilst emphasising the fact that politicians are very quick to lend their support to our campaign because our Crown Offices are so highly valued by the community. Click on the pic to the right to download in PDF format.