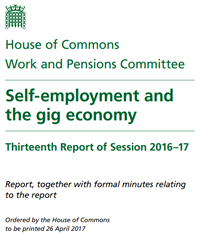 The issue of employment rights and the way workers are treated in Royal Mail and Parcelforce came up in the group discussions at the North West Regional Conference earlier this year, and reported in detail by this website.

Now a report from a Merseyside MP from Birkenhead, Frank Field on the self-employed workers on contract to Parcelforce has been issued, prompting this press release from the CWU and signed by all three Union Officers; Dave Ward, General Secretary, Terry Pullinger, Deputy General Secretary (Postal) and National Officer Davie Robertson:

The treatment of self-employed workers in Parcelforce that has come to light in Birkenhead MP Frank Field’s report is a disgrace and completely unacceptable to the CWU.

We will be demanding an urgent meeting with the company and will take whatever steps are necessary to bring this to an end.

It must also be highlighted that Parcelforce is part of the Royal Mail Group and the overall company must now be held to account for operating in the same outrageous way, that it has consistently attacked it competitors for.

The CWU has been fighting against these employment models for over 15 years and if it was not for the union, Parcelforce would have 100 per cent owner drivers, like all of the companies we compete against.

This is an employment model purely designed to take away employer responsibility to its employees, minimise costs and maximise profits – this must be challenged.

The intorudction to the Summary of Frank Field’s report entitled ‘Self-employment and the gig economy’ states:

The self-employed are a large and growing part of the UK labour force. Five million people—15% of workers—are now self-employed, and the expansion of self-employment has played a significant part in current record employment levels. New technology has facilitated the growth of the “gig economy”, which has led to a large number of positive developments and opportunities, as well as continuing to alter the nature of work in many sectors. This continued growth in self-employment presents fundamental challenges for the welfare state. 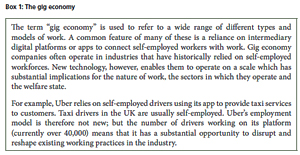 Our welfare system is founded on contribution. Workers pay in through National Insurance Contributions (NICs), and receive support in return. Historically, self-employed people received much less support than employees.

Now, following the introduction of the New State Pension, entitlement to all of the services funded by National Insurance is almost equalised. Yet self-employed workers contribute far less. The incoming government must set out a roadmap for equalising self-employed and employee NICs. To fail to do so would be to weaken further a crucial pillar of the welfare social contract.

On page 13 of the report example evidence from workers is provided, including this one from a Parcelforece worker:

“I too have worked for Parcelforce for many years ie. since [redacted], and became self-employed in [redacted]. At first it appeared to offer a good package but it slowly dawned on me that I wasn’t truly self-employed as I have no flexibility or choice over my working hours/times.

I have to complete the route regardless of how many parcels I have to deliver.

I regularly work from 6am to 5pm 5 days a week and even more at Christmas when I also have to employ an approved driver and provide an additional van all at my own cost.” Parcelforce courier, name withheld

Self-employed people are not covered by employment law. They have very few rights at work, limited to protection for health and safety purposes, and some protection against discrimination.

For HMRC purposes….someone who is designated “employed” for tax purposes (for example, under IR35 legislation) but does not have an employment contract would not automatically be entitled to employee or worker rights.

The report ends with 10 recommentations including:

* The incoming government should set out a roadmap for equalising the National Insurance contributions made by employees and the self-employed.

Profit, not flexibility, is the motive for using self-employed labour in these cases.

It is incumbent on government to close loopholes that incentivise exploitative behaviour by a minority of companies, not least because bogus self-employment passes the burden of safety net support to the welfare state at the same time as reducing tax revenue.

* The apparent freedom companies enjoy to deny workers the rights that come with employee or worker status fails to protect workers from exploitation and poor working conditions. It also leads to substantial tax losses to the public purse, and potentially increases the strain on the welfare state An assumption of the employment status of “worker” by default, rather than “self-employed” by default, would protect both those workers and the public purse and would put the onus on companies to provide basic safety net standards of rights and benefits to their workers.