The CWU has issued it’s full and unequivocal response to the government-commissioned Taylor Review of Modern Working Practices, placing the Union at the forefront of the fight back against Tory double-speak on worker’s rights.

In writing to all Branches via LTB396/17,  General Secretary Dave Ward reaffirms the CWU’s key strategy of calling for a new deal for all workers:

While the Review does include a significant recommendation to abolish the Agency Workers loophole, which the CWU has lead the way in campaigning for over a number of years, on the whole it falls well short of putting forward the solutions that are needed to change the balance of forces in the world of work and address the problems in the UK labour market.

The CWU issued a press release in response to the Review. While our criticisms of the Review’s shortcomings have been echoed across the labour movement, crucially we go on to state that it is now incumbent on the entire trade union movement to do something about it and we then set out an appropriate course of action.

This is consistent with the position the CWU has taken over the last two years and in our work at the TUC and within the Labour Party. In the coming weeks we will be stepping up our activities to work towards a stronger response from the trade union movement.

Specifically, the CWU is calling for a concerted TUC campaign to end insecure employment and in-work poverty. This includes all TUC affiliated unions agreeing a common bargaining agenda and the publication of a TUC manifesto on what constitutes a new deal for workers, alongside a proper plan – including deliverable action – to achieve it. 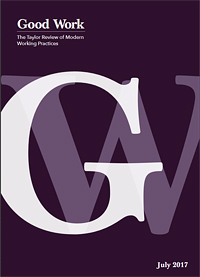 These proposals have already been the subject of CWU motions to recent TUC and Labour Party conferences and we will be submitting further motions this year to strengthen the response from the whole labour movement.

As we continue to take a lead in calling for action from the wider movement, the union must now also look at new ways to root out insecure employment models in our own industries and sectors. At its meeting on 29th June, the NEC agreed that we will bring back a comprehensive paper in the near future fleshing out the detail of what a new deal for workers should look like and what we must now do to achieve it.

In summary, it is very important that branches recognise the overall direction the union is taking and how we are determined to join up our industrial and political agendas, with the objectives we have set for redesign.

With the general election result and Labour offering a transformative manifesto, it is time for the trade union movement to deliver a new kind of trade unionism and we will be working to ensure that CWU is at the forefront of reasserting trade union values and organisation across the UK.

You can download the Taylor Review by clicking on the cover pic above.