It is OK to hate – Racism! That was the message at CWU Conference last month when a presentation was given to the Conference delegates from charity Show Racism The Red Card!

But now we have the General Election 2017, and before it we had the EU Referendum giving the excuse for racism to rear its ugly head from the sewers of this country, and increasing racist attacks and abuse in UK streets across the nation as never before.

CWU North West Regional Chair and Blundellsands councilor, Dan Lewis is proud to be associated with the Stand Up To Racism (SUTR) campaign which is fighting to keep racism off the election agenda. 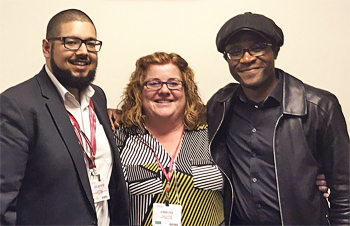 Here he is pictured (left) with CWU President Jane Loftus and BA Richardson at the CWU Conference 2017 fringe event against racism.

Introducing the SUTR and giving out their leaflets at the CWU’s NW Regional meeting held in Manchester yesterday (9th May) Dan said:

"Supporting the charity in the North West is crucial if we are to stop the increasing levels of racist attacks and in order to educate the public and break down barriers that may exist within our communities."

Sadly, the UK is losing people from the NHS nationally. Both nurses and GPs as a result of racist abuse that Brexit is making worse.

Indeed, in Southport one of the main group GP practices is losing this September, one of their most hard working and popular GPs because of racist attacks against his wife that have occurred twice since last year’s referendum. Such is the fear she lives with everyday, that she is no longer able to live in the UK with her husband and children. Hence they are forced to move back to Poland.

Stand Up To Racism says in a petition that they are running on their website:

"The snap election called by Theresa May for 8th June raises the serious prospect of a further rise in racism. Hate crimes soared by 41% following last year’s EU Referendum, and much of the same toxic scapegoating which fuelled this rise now threatens to dominate the General Election.

UKIP launched their manifesto with a pledge to stop Muslim women wearing the Burka. In the wake of Donald Trump’s Muslim Ban and a shocking rise in anti-Muslim hate crime fuelled by the far-right and sections of the press, Islamophobia must be challenged at every point in this campaign.

Theresa May is imposing draconian rules on immigration and has refused to guarantee the rights of EU nationals. Migrants and refugees are being blamed for the effects of economic stagnation and austerity – in fact they play an indispensable role in society and the economy, staffing crucial public services and contributing through the tax system.

There is no place for racism and scapegoating in our political discourse. We call on all political leaders, media outlets, candidates and campaigns to refrain from the scapegoating of migrants and refugees and take responsibility for halting the rise of racism, Islamophobia and anti-Semitism."

Dan urges all CWU members in the North West and across the whole of the UK to sign the petition by clicking on the pic above.

You can join the campaign on facebook and twitter throughout the campaign on the ‘#RacismOut of #GE2017’ hashtags to spread the anti-racist message and make it clear that you will not accept racism, Islamophobia, anti-Semitism and anti-migrant rhetoric as a way of attempting to pick up votes.