This coming Saturday wioll see a massive event taking place in London as The People’s Assembly once again takes to the streets to demonstrate against the current Tory Government’s attacks on working people via its austerity programme, and the Trade Union Bill.

Alongside the Trade Union Bill, on each of these four issues working people are under ‎attack from the Government and it is important that the labour movement makes clear the strength of opposition to the austerity agenda. 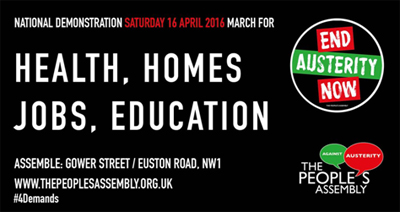 This is also an opportunity to express solidarity with junior doctors and steel-workers who will be taking part.

All CWU Branches are urged to make this a priority commitment and ensure their attendance at the demonstration and publicise it among CWU members as widely as possible.

The CWU has been at the forefront in calling for a new deal for workers in the UK and maximising our attendance at this demonstration is another step towards achieving this objective.

The demonstration will assemble on Gower Street at 1pm and march to Trafalgar Square. The CWU will have a bloc on the march (bloc 6) which we would ask branches to join.

Further information is available at www.thepeoplesassembly.org.uk/hhje