North West Youth Officers Elli Long and Chris Egan are amongst several young workers and CWU Reps traveling around the region to promote both the CWU and in particular the Union’s 4 Pillars Of Security campaign.

Pictures from the event were posted on various Twitter accounts by youth members and the Region’s Secretary, Carl Webb.

So in the spirit of further publicising the Union’s campaign and of course the activities in the North West, this website editor apologises for nicking some of the pics posted by Carl! Well, not really, ‘cos a good story is worth nicking pics for! 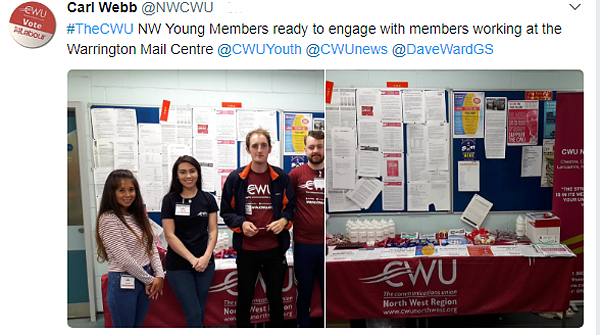 For further info on the 4 Pillars campaign including update bulletins, and indeed what it is all about, take a look here

Oh and you might see yet another stolen pic!