Cheshire and Merseyside NHS are currently working to form one of the first ACOs in England with deadline of March 2018!

Yes, the money is still being spent from the NHS budget to turn the NHS into an American Care System with Accountable Care Organisations at their centre; despite the Judicial Review on the NHS and ACOs granted by the high court earlier this month.

In their document Cheshire & Merseyside Sustainability and Transformation Plan which includes every hospital within both areas, they state:

"There is significant variation in the form of ACOs being proposed and developed across the STP. For instance, in some areas an ‘accountable care management system’ is being developed whilst in others a ‘partnership’ is envisioned."

"There needs to be a real focus on the development of an STP wide framework to help design the right ACO model for each locality."

In the same document they clearly state that their plan is to:

"LCH play a key role in moving towards the developing Accountable Care System for Liverpool."

Wirral’s NHS volunteer based campaign group Defend Our NHS supports the Judicial Review; they recognise that the legal challenge affects everyone – patients, public and NHS Staff.

Kevin Donovan from Defend Our NHS urged people to support the appeal to fund the Judicial Review:

“The leader of Wirral Council, Councillor Phil Davies, says he opposes the government’s so-called ‘sustainability and transformation’ plans which are the framework for the Accountable Care Systems and Organisations. Yet, behind closed doors he has been supporting the development of the whole apparatus. The documented policy of Wirral Council – in collaboration with the local clinical commissioning group (and quoting from Council papers) – is now ‘the development of a single ‘Accountable Care System’’. Wirral Council acknowledges that, ‘The STP will operate at Cheshire and Merseyside level’.”

“Defend Our NHS members are yet to find anybody in Wirral outside of a campaign group who has heard the initials ‘STP’ or ‘ACO’ or ‘ACS’, let alone understands what they will mean for our beloved National Health Service. The issue is that Accountable Care Systems and Organisations are being planned secretively, including right here in Wirral. They are a new form of local NHS and social care organisation; the intention is to cut costs by managing demand for health and social care. This will speed up the creation of a two-tier system – where those with money will use private providers and the rest will be left with reduced health and social care services.  Protecting the NHS as a fully funded public service of comprehensive healthcare is vital for us all." 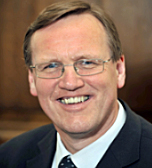 However, in a position statement, Councillor Phil Davies, makes it clear that there is no such truth in the view that he or the Council are doing deals:

"As a fellow Labour Party member, I know the guiding principles of our precious NHS go to the core of our shared beliefs and why we are part of the Labour family.

That’s why, as Leader of Wirral Council, I can say we are absolutely opposed to the outsourcing of health and social care services to American-style health care providers, and we will use all of the tools at our disposal to ensure this does not happen.

Recent allegations that the Council’s leadership is ‘racing to introduce a ‘sustainability and transformation partnership’ and an ‘accountable care system’ which will ‘slash, trash and privatise’ our NHS are not only totally untrue but they are an insult to hard working Labour Councillors who are proud of the NHS and have fought to defend the principle of a publicly funded National Health Service which is free at the point of use." 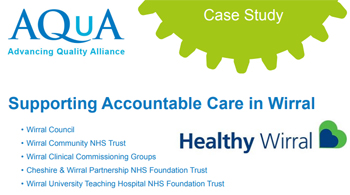 But the true intent of the Healthy Wirral Partnership (Wirral CCG) is to develope an ACO for Wirral, at least that seems to be where the evidence is pointing.

They commissioned Advancing Quality Alliance (AQuA), (part of the NHS and set up in 2010 by the Tories) to "help them set out an exciting vision to transform how local health and care is delivered, by becoming an Accountable Care Organisation (ACO)."

The involvement with AQuA of Wirral Borough Council is referred as you can see from the pic above and as it has this quote in their website documentation:

Clare Fish, Executive Director for Strategy at Wirral Council, describes how this has helped…

“Our current health and care system was fragmented and unsustainable. Previous attempts to make changes to both the ‘how‘‘ and ‘what’ we needed to do floundered for a number of reasons: lack of will, sovereignty issues, and lack of leadership."

"Supporting Accountable Care in Wirral – May 2017"

It can of course be argued that whilst this is a case study according to AQuA, it makes sense for all parties in the Wirral to be involved in clarifying their policy commitments and looking at options to accept or oppose ACOs in their jurisdiction.

However, there is clear commitment to introduce ACOs into health care in Merseyside and Cheshire and it is this that is being developed by several partners in Healthcare delivery.

When you look at the list of board members of AQuA, here, all have fingers in the pies of local Hospitals, CCGs, PCTs, and whose sole aim is to help transform North West NHS into ACOs!

"In parallel, we have also set an expectation with our NHS providers that they will need to work more collaboratively to improve the quality of care for the people of Wirral by becoming an Accountable Care Organisation (ACO).

One of the first tasks we will undertake as an integrated commissioner will be to develop and publish a prospectus which will outline our joint commissioning intentions for a provider ACO."

The evidence that ACOs and Foundation Trust Hospitals, brainchild of Alan Milburn in 2002, are all about privatisation of the NHS can clearly be seen over in the USA.

In an article published on 29th August 2012, the same year that the Tory Government’s Health and Social Care Act came into law and abolished the responsibility of the Secretary of State For health to actually provide Healthcare and the NHS; the on-line presence of the American periodical, Managed Care Magazine (managedcaremag.com) stated: 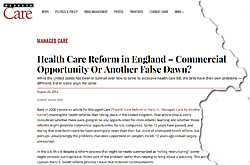 "One can interpret the government reform program as an attempt to create a regulatory environment for England’s health care that allows government itself to move away from direct responsibility for both the purchasing of care and its provision, handing the former to arms-length regulatory bodies and the latter to a mix of self-governing social enterprises and the private sector.

A central plank of this is to get all of England’s NHS hospitals to a point where they are financially and operationally stable enough that they can be Foundation Trusts."

It further explained the best way forward for US Healthcare companies wishing to make inroads into the UK’s NHS:

"U.S. companies looking to make inroads into the U.K. health market might be advised to seek commercial alliances with well established NHS Foundation Trusts.
In this regard, one of the more interesting components of health reform in the U.K. in the last decade has been the increasing use of commercial companies to deliver primary care services in England."

Finally, what can clearly be seen as the final bell tolling for the NHS and giving away the true intent of American Healthcare Companies when it comes to Brexit and UK/US trade deals:

"It is not too far-fetched to imagine that within a couple of years, a private company could be granted a “franchise” to establish a managed care organization encompassing primary care and the commissioning of acute services for a defined population in England.

That pathfinder could be the harbinger of a general trend to franchising a significant part of NHS management and delivery to any organization, public or private, that can meet the criteria."

We all know that in less than two years after that article was written and from the Act becoming law, Virgincare and others were indeed ensconced into the NHS syphoning off billions in profit to shareholders, and that worst still a whole hospital (Hitchinbrooke) had been handed over to Circle Healthcare, but subsequently because they couldn’t make enough profit, handed it back to the NHS in 2015!

The extent to which WBC and Labour Councilors can stop the development of ACOs in Wirral is yet to be seen, but the undeniable fact is that Wirral & Cheshire Hospitals and the CCGs of both Liverpool and Wirral are intent on setting up Accountable Care Organisations in the North West.