The CWU Black Workers Conference, along with the Union’s General Conference, when it showed racism the red card, have made it clear that in today’s society, racism in all its forms should not be tolerated.

This ugly evil flew out of the Pandora’s Box of the EU Referendum and has multiplied in size ever since. It evens permeated within such tragedies as the Grenfell Tower inferno, and strikes everyday on our streets.

This prop was put to the CWU Black Workers Conference:

“The CWU and the trade union movement has played and continues to play a key role in tackling racism. Conference notes that there has been a rise in racist attacks and abuses targeting minority communities and foreign citizens in the United Kingdom post Brexit.

The CWU condemns racism, xenophobia and hate crimes unequivocally. We will not allow such behaviour to become acceptable as it has no place in our society.
Conference calls on the RAC to work with the Equal Opportunities Department, the NEC and anti-racist groups in combating such behaviour and encourage and promote the reporting of hate crimes.”

The poster below has been created in conjunction with the RAC, the Equal Opportunities Department and the Communications Department. 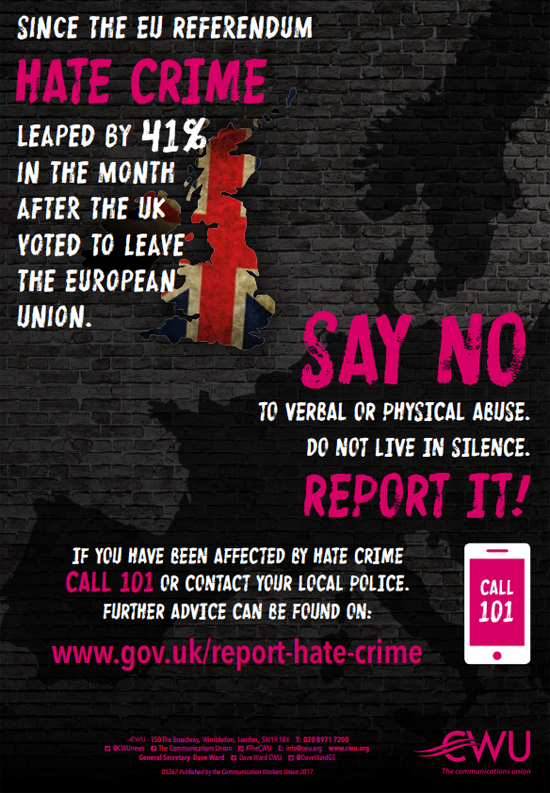 CWU HQ asks that Branches display the Poster on their Notice Boards to encourage and promote the reporting of hate crime.