No matter how long you have lived, worked and paid taxes in the UK; if you are an EU citizen it will cost you a minimum of £72.50 plus a further £46 each for your children!!
Then of course, they can easily refuse your leave to remain!!

Furthermore, EU citizens working and living here who have less than 5 years of continuous work will be refused permission to stay!

No wonder over 30,000 EU Nurses have left the UK already, and that the number coming from the EU to work here has drastically fallen and will now continue to the point of actually ceasing!

A massive skill shortage is about to hit the UK as a result of this, opponents of this scheme will be claiming as it bites into the areas were the UK depends upon EU workers e.g. the NHS, seasonal fruit picking work, and building work.

In the view of many, this is nothing more than an immoral money-making scheme from Tories who claim they care about EU citizen’s rights!

Will UK citizens living and working in the EU, end up having to pay the same?

The Tory Government’s so-called caring for citizen’s rights comes at a cost of course and is contrary to everything said during the EU Referendum campaign to leave the EU. 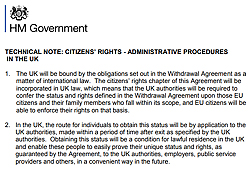 Not only that, but one of the most erroneous things stated in their ‘technical document’ forwarded to the EU negotiators is this:

"The UK recognises that the system it currently has in place for dealing with the processing of registration certificates and residence cards under Directive 2004/38 is not fit to deal with the situation after we leave the EU."

The reality is that the UK never did utilise such a system, nor did they control the number of EU citizens coming here to work by registering them as is stated they can do, in that same directive document!

Below is the extract from a press release from Home Office UK Visas and Immigration Department for Exiting the European Union issued on the Gov.UK website today, which makes no mention of this condition. For that you will have to read the Technical Note (page 2 para 10)

The Prime Minister has been clear that safeguarding the rights of EU citizens living in the UK and UK nationals in Europe is the first priority for negotiations and she said last month that an agreement is within touching distance.

Secretary of State for Exiting the EU, David Davis said:

"We have been clear that safeguarding the rights of EU citizens is our top priority in our negotiations. They make a huge contribution to our economy and society and we do not want to see that change as a result of our decision to leave the EU. We will support everyone wishing to stay to gain settled status through a new straightforward, streamlined system.

The last negotiation round saw real progress in this area and I believe the document we have published today can facilitate the deal we need to guarantee the rights of UK citizens living in the EU27, and vice versa." 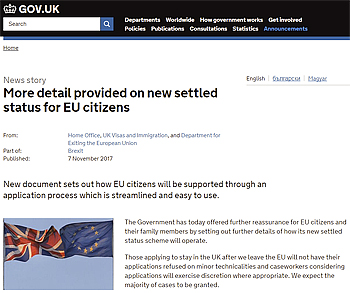 The document commits to:

*giving EU citizens plenty of time to apply, with a 2-year grace period after we leave the EU to make an application for settled status

*keeping the cost of an application to no more than that of a British passport
giving EU citizens a statutory right of appeal, in line with their current rights through the Free Movement Directive, if their application is unsuccessful

*making decisions solely on the criteria set out in the Withdrawal Agreement, with no discretion for other reasons for refusal

*introducing a digital, streamlined and user friendly application system
not requiring EU citizens to have held comprehensive sickness insurance or to provide fingerprints

*a simpler, lower cost process for those who already have permanent residence documentation

"I have been clear that EU citizens living in the UK make an enormous contribution to our country and we want them to stay.

Applying for settled status will be a streamlined, low-cost, digital process and EU citizens are being consulted on its design to ensure it is user-friendly.

We know that there is some anxiety among EU citizens about how the process of applying for settled status will work so I hope this document provides some further reassurance."

The document also sets out that applicants will be asked to declare any criminal convictions and be checked against UK security databases. This is a reasonable measure to keep the country safe from those who have abused our hospitality by committing serious crimes.