A new report issued last week to Parliament, details the conduct of false claims and incorrect information which was at the core of the EU Referendum campaign; along with the complaints received.

It found that the Brexit campaign not only exaggerated, misrepresented facts and even lied in their campaign literature and posters, whilst the Remain camp were guilty only of exaggeration with regard to the negative effects upon this country of Brexit. 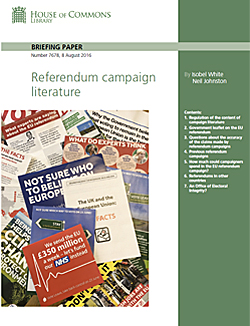 Furthermore, the Brexit camp also repeatedly denied their policy was to remove or curtail EU directive based employment rights and health and safety legislation from English law, despite various Tory Brexit MPs having stated this in the media prior to the campaign: Boris Johnson, Priti Patel, Ian Duncan Smith and Chris Grayling.

Worse still both Kate Hoey and Gisele Stuart, labour MPs; claimed it would not happen and that the Tories had no intention of doing such a thing.

The signatories to the EDM demand action with the creation of an independent Office of Electoral Integrity.

The Early Day Motion was tabled by some 42 MPs who signed the statement which called for action:

‘That this House welcomes the petition on the change.org website, entitled Restore truthful politics – create an independent office to monitor political campaigns; notes that this petition has gained more than 160,000 signatures since it was launched following the EU referendum; agrees that misleading claims put forward during the referendum campaign undermine the integrity of our democratic system; supports the call for the establishment of an independent Office of Electoral Integrity (OEI) to factually verify the truthfulness of claims made during political campaigns, with powers to issue clarifications and fines where appropriate; believes that this will help to ensure that future elections and referenda are contested on the basis of accurate and verifiable facts, strengthen accountability in political campaigning in the UK and restore faith in the democratic process; and urges the Government to consider the merits of creating an OEI and provide a response to the petition as soon as possible.’

Many on reading the 21 page document will feel that there is enough evidence in the report to question the whole validity of the referendum result, although the Government seems hell bent on using the non-legally binding, and now derided plebiscite exercise; as the basis for authority to leave the EU.

Worse will no doubt come in the next general election as a result of the lack of any action during the referendum to curtail the misleading and in some cases entirely untruthful statements made by the Brexit campaign. Having gotten away with doing so and with the media merely reporting such claims and lies as fact; democracy in this country is under threat as the campaign managers of the political parties utilise the same dishonesty in their Election campaigns.

To quote Alan Renwick, of UCL’s Constitution Unit when argueing for a mechanism for assessing the truthfulness of claims made during the campaign e.g. an independent Office of Electoral Integrity:

"Failure to do so may do more than render future referendums unhealthy. If the degree of mendacity witnessed in this campaign were to become commonplace in our electoral politics as well, one of the crucial foundations of our democratic system would be badly damaged."