The UK’s largest union for postal and telecoms workers, the CWU, has today (Monday 25th April) voted to back a position of remaining in the European Union for the upcoming referendum at its annual conference held in Bournemouth this week. 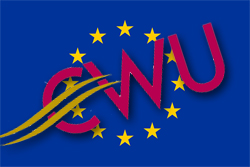 Following an overwhelming vote in favour of backing campaigning to stay in Europe, Dave Ward, CWU general secretary, said in a press release:

“We’ve had enough of the Boris and Dave show. This referendum is about our jobs, our rights at work, our homes, our public services and the prices we pay in the shops. We cannot let it be hijacked by a right-wing agenda.

A vote to leave would fire the starting gun on a race to the bottom on employment rights which only the EU has stopped the Tories from scrapping. Promises of sovereignty are meaningless when working people will be denied a voice in the workplace."

“The EU is far from perfect‎ – but it’s necessary for tackling inequality, tax avoidance, climate change and preventing workers being exploited across Europe. It’s time for the labour movement to make the progressive case for staying in the EU. This referendum is not a contest between two Tory visions for our future." 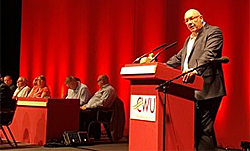 During the Conference debate, Dave stressed that it was important for the voice of the labour movement to be heard as part of the debate on whether to remain or leave the EU, come the referendum vote on 23 June.

“There are lots of arguments going on today about the rights and wrongs of Europe. Our decision must be in the best interests of workers,” said Dave, who pointed out that “the reality is that most of the protections that workers have today come from Europe.”

He then highlighted agency workers rights, TUPE, holiday pay and much Health and Safety legislation as having originated in the EU.

The NEC motion, up for debate, pointed out that “the problems we face in the world today – inequality, globalisation, insecure employment, climate change, tax avoidance and the refugee crisis- cannot be dealt with without international co-operation.”

On the thorny issue of immigration, Dave declared that the housing crisis and problems with the NHS were not the fault of migrants but successive government for failing to put people first. 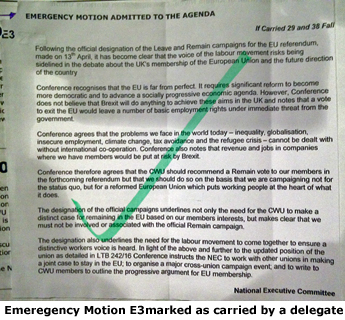 A passionate debate then followed with opposition to remaining in the EU, expressed by Lenny Shail of Coventry branch who cited late Tony Benn and Bob Crow among those from the left who have opposed membership.

Lennie denied that the EU had ever stood for working class people. “It has been a series of business treaties – it has always acted as an arena for business,” said Lennie, who was also critical of Labour leader Jeremy Corbyn for coming out in support of remaining in the EU, when he had made a number of past statements questioning the structure.

Marie Exall of Greater London Combined branch acknowledged that the EU was “a capitalist club pursuing a neo-liberal agenda” but the challenge was to reach out to fellow workers organisations across Europe. “Leaving will stop us working with our friends in the global community,” said Marie.

Mark Elwen of West Yorkshire branch, challenged the notion that the EU had helped workers. He claimed that the agency worker regulation emanating from Europe can be got round by derogations.

Linda Woodings of East Midlands branch recalled how during the 18 years of Thatcher and Major’s government, “the only hope for workers was Europe.”

She drew the parallel with the present Tory government. “It is amazing that the hard left want to join with Farage, Ian Duncan Smith and Boris Johnson to come out,” said Linda.