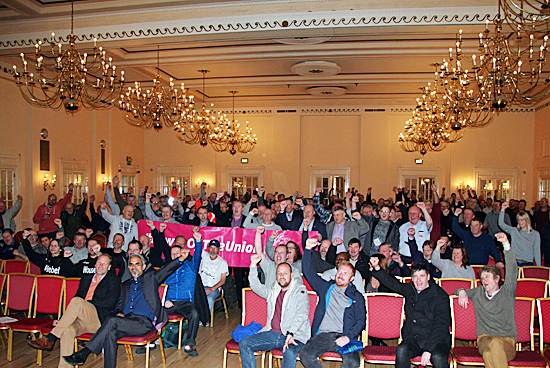 On a cold and snowing morning in Liverpool, delegates from CWU North West and North Wales Branches gathered at the Adelphi Hotel to listen to presentations from the Union’s Four Pillars negotiating team on the agreement that will shortly be put to ballot of all the Postal section membership of the CWU.

Jane Loftus, the Union’s President opened the Four Pillars Forum and detailed the events of the meeting, and asked for all all mobiles to be turned off. "I don’t want to hear tunes or any ringing during the briefing." she announced. 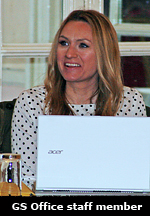 However, as might well have been expected, that is precisely what happened a few minutes later, to great laughter from the room; especially because the phone in question belonged to one of the GS office staff sat at a table to the right of the top table!

Jane also mentions in her introduction, a presentation video from pensions Actuary, Hilary Salt. This can be accessed direct on this website’s Four Pillars Campaign pages, and has been available for a couple of months.

She thanked everyone for attending despite the ‘inclimate weather and difficulties some people have had in traveling to this event today’ and apologised for the 30 minute delay to the event which was held in order to allow for traveling difficulties.

A short video produced by the Union’s Communications Dept was shown (pictured below), but for music copyright reasons, we are unable to show it here. 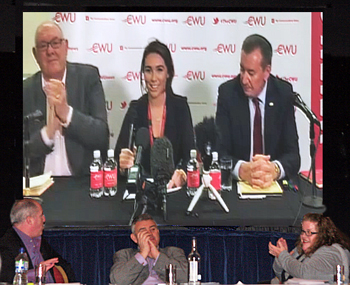 The video was a ‘vox-pop’ of the activities in support of the Four Pillars Campaign by CWU Branches across the country and as such brought tears of pride to many of the delegates watching it.

The key day’s events are reported here with the key speeches and question and answer session following National Officer and lead negotiator in the Four Pillars Campaign, Terry Pullinger’s presentation:

He detailed the negotiations, and gave tribute to the support of the CWU Postal members in all of the Branches across the country; which as he stated, forced the hands of Royal Mail management and shocked them with the resolve of the CWU membership to fight for their rights in terms of Pensions and Pay and for the Postal service the UK public demands and deserves.

He also, to huge applause, condemned Royal Mail managers who use bullying and intimidation tactics in the workplace, saying "That has to stop!"

Following his presentation, the floor was given the opportunity to ask questions which Terry then responded to:

He made it very clear that Royal Mail has thought the Union was finished and that they could simply walk over us. "Make no mistake," he said, "you’ve got a lot to be proud of and have forced Royal Mail to take the CWU seriously." 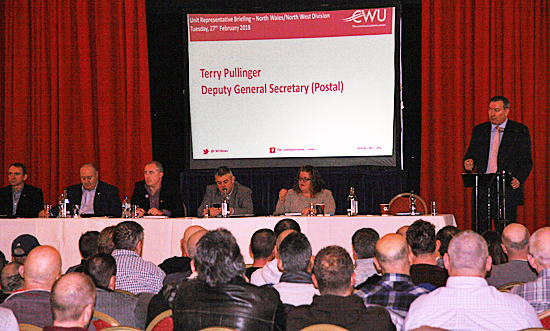 Next was the Operational Overview Session of the meeting, beginning with CWU National Officer, Andy Fury:

Complimenting Terry Pullinger for his tenacity in getting Royal Mail to the negotiating table, he added that this is ‘absolutely the best agreement we could get." He also confirmed there was no catch in the agreement and that the 89.1% Yes vote made this happen, and that it was a ‘game changer’.

National Officer for Parcel Force, Davie Robertson made it clear in his presentation:

"This has been a significant and difficult set of negotiations, but the outcome has been significant in this fact. We are now back on the CWU’s agenda. This agenda is about putting us in charge of change rather than reacting to a hostile employer, we have now shapened the future of this company again.

It’s the right agreement at the right time. It’s an agreement that puts us in the best possible position right now. In fact we have done Royal Mail a favour. This agreement will enhance the position of Royal Mail, enhance the business, and ensure we can compete properly, which is not something they’d be able to do with their strategy."

Then came National Officer Mark Baulch, to discuss elements of the negotiations on the CWU’s proposed Four Pillars agreement.

Mark said that these 50 days of negotiations, " Feels like a life-time in many ways!"

He explained, "You say, they were very confidant. They had spent a lot of money and they believed they had the hearts and minds of their workforce, our members. They said that they had surveyed 70,000 and when we presented our Four Pillars, they even said to us that they ‘don’t believe your members want what you are asking for!’

That is the level of contempt in which we started the discussions."

You braved the winter weather and the employer’s contempt – and WON! 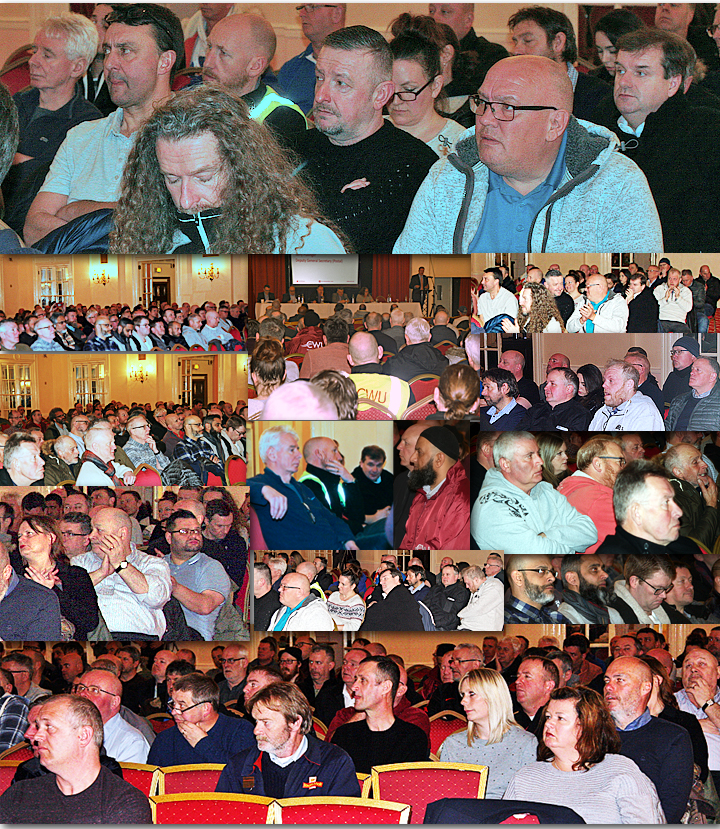 ……Pen biting stuff for some!