An update was issued today in the form of LTB5611/17 which is reproduced below in full:

As part of the Union’s ongoing Four Pillars campaign, we have continued to pursue our claim for a basic pay rise for CWU represented grades in Royal Mail Group and Parcelforce from the April 2017 review date. 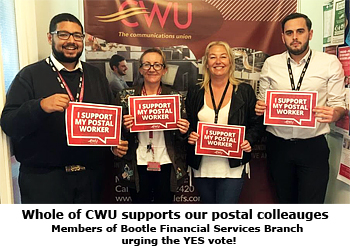 Our claim aims to secure a fair pay rise that maintains members’ living standards in the face of rising cost of living pressures and reflects their increased productivity and continued contribution to the profitability of the business.

I am therefore writing to update Branches on the very latest talks with Royal Mail and to report details of management’s revised pay offer which was sent to the Union on Friday 8th September, at the same time as a summary was released direct to employees.

Given the strong level of Union support and judging by management’s communications and behaviour in the negotiations, the CWU’s Senior Officers do not believe that we will see any real progress on the key issues until at least after the ballot result is declared.

However, management continue to revise their proposals and publicise them direct to staff – as opposed to tabling them to the CWU in the formal talks.

The last of these is a new pay offer, detailed in Mike Newby’s letter dated 8th September which we believe still falls way short of our expectations and the aspirations set out in the CWU’s original claim letter sent to the employer in March 2017.

A download of the CWU’s letters to Mike Newby is available below, along with the above mentioned documents. 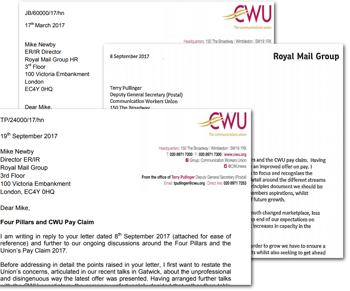 Endorsed by the Postal Executive on 19th September which formally rejects the latest offer from the business on the grounds that:

1. it effectively proposes the end of traditional national pay bargaining based on cost of living and company performance;

2. it signals the introduction of performance related pay (for this and future years);

3. it represents a real terms pay cut for CWU members in Royal Mail Group and Parcelforce;

4. it doesn’t’t flow through to other payments and allowances, including overtime and scheduled attendance;

5. it is an unconsolidated lump sum payment linked to a series of un-agreed and unacceptable strings and conditions including the introduction and trialling of new work methods, such as multi-bundle outdoor delivery, indoor preparation methods, upstream automation, large letter walk sort, first wave sequencing, self-managed walks, automated data capture and the continued introduction of LAT’s.

It is clear that the strategy in respect of further negotiations has now changed since the opportunity to achieve the key principles and avoid the need to ballot for Industrial Action has now time expired. 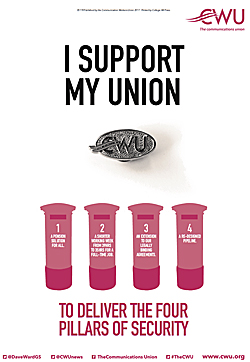 We are now in a different phase of the national dispute, where the stakes are far greater and we will require a far more definitive agreement in order to resolve the outstanding issues around pay and the Four Pillars.

Further talks with Royal Mail are planned for later this week but, as stated earlier, we suspect that any meaningful movement in those talks will only develop in the aftermath of the ballot result.

The plea of Royal Mail management to encourage our members to delay voting is clearly an attempt to disrupt the democratic voting process and timescales in the forlorn hope that people will defer voting and potentially forget to cast their vote in time for it to count.

Our focus at the moment therefore has to be on delivering as big a return as possible in the ballot and securing a massive YES vote in support of strike action.

We therefore urge all Branches to continue to do everything they can to maximise turnout and ensure all members participate in a vital referendum on their future without delay and before the ballot closes on 3rd October.

Further updates will be provided to Branches in due course.