Following successful strike action on Saturday 3rd December it appears that the Post Office are still refusing to enter into negotiations with the CWU, and as a result further industrial action has been announced by the Union today.

On Saturday, the senior managers who were dispatched to work in the Crown Office Network on the first two strike occasions did not cover the action this time. This meant Crown Offices that had been kept open on previous strike days were on this occasion closed.

This strike action focused primarily on the Crown network as the vast majority of our members in Supply Chain work Monday-Friday as there are no cash deliveries to Post Offices on Saturday. Also our Admin grades are generally Monday-Friday duties with the exception of the Customer Helpline based in Chesterfield and the call centre above Caernarfon Crown Office.

For the third occasion running, Unite members were also called out on strike.

In a letter to all CWU branches, the details of the forthcoming industrial action has been published and major TV news outlets such as Channel 4 News; mentioned this during this evenings news bulletins.

Given the Post Office is continuing to deploy its plans, it is necessary to escalate the industrial action. To this end, the Postal Executive has unanimously endorsed 5 further days of strike action as follows:

This decision has not been taken lightly and it is disappointing that the Post Office has so far failed to respond positively to the legitimate and serious concerns of our members.

Therefore, the blame for the service to the public being disrupted lies squarely at the door of the Post Office, especially as it is clear they are planning to press ahead with more franchising, closures, job cuts and the closure of the Defined Benefit pension scheme.

Explaining why the strikes have been called, CWU assistant secretary Andy Furey said:

“All of the blame for this unfortunate turn of events is 100 per cent down to the intransigence of the company, who have launched an unprecedented attack on the jobs, job security, and pensions of thousands of hard-working and loyal Post Office workers.

Our members want the Post Office management to pause its closure and privatisation programme, hold off on its planned pensions changes, and commit to sitting down with us and with the other key stakeholders of this Great British institution and, together, construct a lasting vision.

"
We want to work together to build a positive future for the Post Office, its workforce and, of course, the people who we serve. The CWU can be a constructive partner to work with, but sadly, the people currently running the company have, so far, chosen the path of conflict and industrial disputes.”

The letter to Branches continues:

Worryingly the Post Office has no clear strategy for growth or a future vision that includes our members; hence the crisis.  We need to fight for the very future of this industry and our jobs.  It is for this reason an escalation of strike action is required.

All Branches and Representatives are urged to support our Post Office members.

We need to get the Post Office into serious negotiations in order to establish a mutually agreeable way forward to resolve this dispute.

Accordingly, following the Postal Executive meeting last week, a letter was sent to Martin Kirke, HR Director, on 7th December offering to meet all day every day this week for meaningful negotiations.

A response was received on 9th December accepting just one day of talks on Wednesday 14th December.

Clearly, after three strike days there appears to be no sense of urgency from the Post Office to resolve the dispute and this further demonstrates why we need to escalate the action. We have written back to the HR Director to express our disappointment surrounding the tokenistic one day for negotiations and made it clear that this indicates the Post Office is not serious or committed to meaningful engagement.

We have also reiterated that our negotiating team remains available on Thursday and Friday this week to continue negotiations.

CWU general secretary Dave Ward commented on the lack of response by the Post Office and the need for further industrial action:

“Our members are being forced into fighting to save their jobs and this great institution from terminal decline.

We want a Post Office that works for everyone, for communities, for small and medium-sized businesses, and for the people who serve them – our hard working members, but the people running the Post Office have no serious plan other than further closures and managed decline and we won’t accept that.”

“We will be making a firm proposal for meaningful talks to establish a vision for the future and, if the company respond to that positively then this dispute can be avoided.”

The LTB also made comment on the lack of progress with any meaningful talks:

It should be noted that despite the Post Office’s recent positive comments in the press and in communications to members regarding its desire to resolve the dispute, no dates for negotiation were offered by the Post Office.

The only meeting we have been invited to attend with the Post Office is the Group Executive on Wednesday 22nd December, which is the day after the close of the government consultation on the Post Office Network and ELEVEN weeks since our last meeting at ACAS.

This is no substitute for proper negotiations and is deliberately designed to delay meeting with us until after the Christmas pressure period is over. 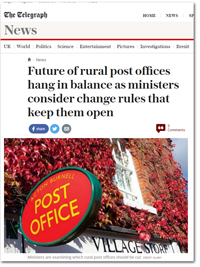 The issues surrounding the Future of the Post Office and the BEIS consultation on the Post Office Network have gained significant media interest over the last few days with articles in the Sunday Telegraph this weekend which focused on the future of the rural Sub Post Offices and contained a quote from Dave Ward.

The article can be accessed by clicking on the pic.

There was also a piece in The Times this morning following on from the Telegraph’s story on the rural Sub Post Offices.  In addition, Andy Furey was interviewed on LBC radio earlier today.

The above EDM has now gained support from 100 MPs which is a reasonable response after a slow start.  Following the bank bench debate last month, we will be doing everything possible to raise the number of signatures further.  Your assistance in this regard is appreciated and Branches are urged to examine the list of MPs who have signed the EDM and contact those who have yet to do so.

Thank you again to Regional Secretaries, Branches and Representatives who have already returned thousands of postcards in response to the government’s consultation on the Post Office Network.

The deadline for returning postcards to CWU HQ has been extended to Wednesday 14th December.

On the morning of Monday 19th December, the first strike day, the postcards will be delivered in bulk to the offices of BEIS in Victoria Street, London, with further details in regards to the event on the day being provided to Union branches at the earliest opportunity.