One of the things that completely shows how the trade union bill is based on ideology rather than any desire to change things for the better is that the focus the Government is putting on the number of strikes we have. The right to strike is of course a basic right and is also an important last resort for unions on health and safety when all else fails. It is also at one of the lowest levels for decades. 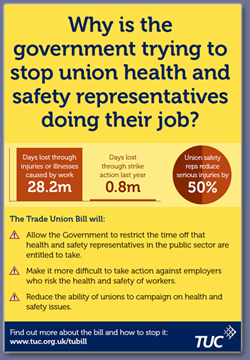 What the Government is completely ignoring is the real problem at work, which is not the 0.8 million days lost through strike action but the 28.2 million days lost every year through injuries, – injuries that are caused by work.

It is therefore mindboggling that the Government are trying to restrict the ability of union health and safety representatives to do their work by telling employers in the public sector that they must cut back on the time that representatives are given to undertake inspections, meet with employers, and help protect everyone in the workplace (whether they are a union member or not).

The TUC has produced a simple “infographic” that illustrates the government approach. It comes in various forms for use in social media or simply print off and put on a notice board.