One of the most popular CWU engineering members of the Union in the North West region recently retired from BT. 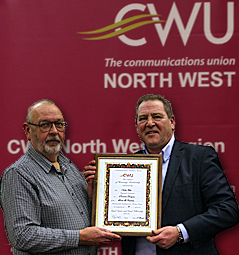 It was fitting therefore that following a career during which he joined the Union as a Branch member, represented his branch colleagues on his local Branch Committee, and subsequently held an officer’s post in both Branch and Regional Committees; for Richard Morgan to be recognised for his Trade Union activities in both health and safety and industrial matters, with honorary membership of the Union.

He was presented with the award during the North West Regional Conference held in Manchester’s Mechanics Institute, by T&FS Deputy General Secretary who paid tribute to Richard for his 42 years of service to the CWU and its members.

In a speech from Andy which was both funny and congratulatory, Andy went through some of the events of his own long relationship with Richard. But most of all he made it clear that he was proud to be presenting Richard this honorary membership award.

Andy gave a brief biography of Richard’s 42 years as a Trade Union activist and Officer, and especially his work when dealing with member’s personal cases and representing them to local management. Many of the cases he dealt with successfully, other’s would not have attempted to do so, Andy told the meeting.

Richard stood by looking a little tense, nervous and perhaps even with a touch of embarrassment, as he awaited his final ‘right of reply’ to the Deputy General Secretary that he has always said, he has a ‘lot of time for’!

You can watch both the presentation by Andy Kerr and Richards acceptance speech below:

Richard received personal tributes during the day from many of the 90 delegates at the NW Regional Conference. 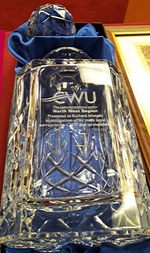 “I was proud to be able to arrange for the award ceremony to take place at the Regional Conference, so as many people as possible had the opportunity to pay tribute to Richard and say a big thank you for his 42 years loyal service to the CWU and most importantly its members.’

Richard’s laid back style and good humour paid him in good stead when he became the first Chair of the merged Regional Committee, involving all constituencies of the union. Thanks partly to Richard we were one of the first regions to truly merge. Now he has retired, he can enjoy more time with his family and having some me time. It’s well deserved”.

Carl presented Richard with the gift pictured, of an engraved drinks decanter from the Regional Committee. 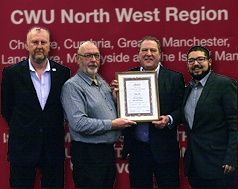 Recalling his time as a member of the now defunct T&FS Health and Safety Consultative Committee that Richard Chaired on the Trade Union side, web editor Chris Ingram said of his experience working with Richard:

“I always found richard to be an effective and by-partisan Chair of a committee which had union safety reps from three of the Union’s four constituencies; Engineering, Clerical and Operators .”

“The CWU was going through a tough time in terms of rivalries between both Clerical and Engineering sections of the Union. After all when two former separate unions come together it can take several years for the various parts to work harmoniously together.

But one area where there was no tensions was with regard to promoting and defending health and safety in the workplace. Indeed I always felt our committee which Richard chaired, was an example of how two separate constituencies can come together over common issues when faced with an employer attacking the working conditions of it’s employees.” 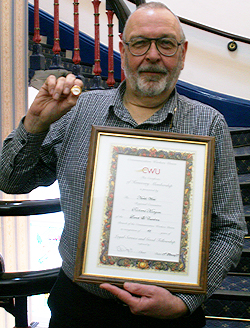 “Richard as Chair of the Committee was key to a unified approach to management and gave everyone irrespective of constituency, equal time and respect for the issues they wanted to bring to the table at the staff-side meetings prior to the meeting with management. He always presented fully, the views of the Committee as a whole and brought individual committee members into the discussion with management.”

He concluded by saying:

“In the wider arena of life in the CWU, Richard is a person with whom you may have differences to debate in important Trade Union and political matters, but he never is anything more than respectful and professional.

He will be missed by me and all those in the North west who have known Richard.”

Back to NW Regional AGM