Despite the claims that the UK abides by the United Nations International Covenant on Economic, Social and Cultural Rights which it signed up to in 1976, and specifically the Convention on the Rights of Persons with Disabilities to which it was one of the first countries to sign up to in 2007; UK courts cannot impose the rights of disabled people under the Covenant (ICESCR). Without this, signing up to the Covenant is almost meaningless when it comes to the disabled UK citizens being able to seek redress in our courts.

The UN’s Committee on Economic, Social and Cultural Rights in 2016 asked the UK government to explain why this was not the case and when it will incorporate the full terms of the Covenant into domestic law, in addition to a whole range of other requests covering major aspects of the Covenant on Disabled people’s rights.

The UN’s report, ‘Concluding observations on the sixth periodic report of the United Kingdom of Great Britain and Northern Ireland’ says this on the incorporation into domestic law and that there are negative effects on UK’s disabled people by having not done so:

This was the government response that prompted the above comment by the UN:

‘The UKG does not consider that the ICESCR contains a legal obligation to
incorporate the Covenant in domestic law. The UKG considers that the UK’s method of implementation, via appropriate legislation and administrative measures , ensures the fulfillment of the UK’s obligations under the Covenant (the Committee itself recognised this approach in its General Comments 3 and 9).

The periodic reports since 1976 set out the
legislation and measures through which the UK, BOTs and CDs are progressively realising the rights contained in the ICESCR, bearing in mind available resources, per Article 2(1) of the Covenant. The CD2014
set out the general legal framework under which human rights
are protected and discrimination addressed.’

In short the British Government for reasons clear to most observers given their attacks on the welfare of the disabled; refuse to give disabled people in the UK the full protection afforded by the United Nations International Covenant on Economic, Social and Cultural Rights.

The United Nations Committee on the Rights of Persons with Disabilities (CRPD) is the body of independent experts which monitors implementation of the Convention by the States Parties. 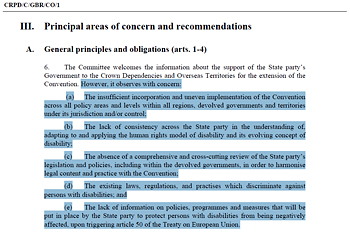 The CRPD, last month, condemned the UK government for creating ‘A human catastrophe’ by neglecting the rights of the disabled as a result the cuts that have been made to social services and disabled welfare payments.

Theresia Degener, who leads the UN’s panel, accused British politicians of failing vulnerable members of society, as well as deliberately misrepresenting the impact of policies through unanswered questions, misused statistics and false statements on policies and legislation.

Ms Degener said evidence seen by the committee and a review it carried out last year made clear the impact of austerity policies on the disabled.

She said the controversial "fit to work" tests were based on a correct assumption that disabled people could find employment.

"However, evidence before us now and in our inquiry procedure as published in our 2016 report reveals that social cut policies have led to a human catastrophe in your country, totally neglecting the vulnerable situation people with disabilities find themselves in."

Indeed, one of the areas politicians in the UK ignore is the almost total resistance of employers to employ people with disabilities. This is made easier by the fact that discrimination laws are not seen to be being enforced and that bad employers seem to be able to operate discriminatory policies with impunity.

But the EU referendum result in June of 2016 has thrown into the mix further anxiety from the UN in addition to that already created when the Tory governments of Cameron declared that it intended to scrap the UK’s Human Rights Act 1998 and replace it with a bill of rights.

Both these two events will greatly impact on the UK’s abiding to the principlces of both the UN Declaration of Human Rights and the Convention on the Rights of Persons with Disabilities.

In fact, The Committee on the Rights of Persons with Disabilities has aksed the UK government to explain how these two events, leaving the EU and abolishing the 1998 Human Rights legislation will impact on the ability of the UK to protect the rights of disabled people. The replies from the UK govenment on this issue has been equivical and blandly without detail to say the least.

One of the most damning comments about the attitude of denial of the UK government as to the true effects of its policies on disabled people, came from the report of the proceedings – Committee on the Rights of Persons with Disabilities reviews report of the United Kingdom:

‘Stig Langvad, Committee Expert and Rapporteur for the United Kingdom, who said that this dialogue was the most challenging exercise in the history of the Committee and that it demonstrated differing perceptions of the implementation of human rights in the State party.

The Committee was deeply concerned that the United Kingdom still considered itself a leader despite its inconsistent disability policy, and urged it to take appropriate measures to address the recommendations contained in the Committee’s inquiry report.

The delegation had provided extensive information on the legal framework, however, the Committee was convinced that the existing legislation was not being adequately implemented and it failed to secure the rights of persons with disabilities throughout the State party’s territory.

Many States considered the United Kingdom to be an example to follow, thus it had a special obligation to set high standards and realize the rights of the persons with disabilities enshrined in the Convention.‘ 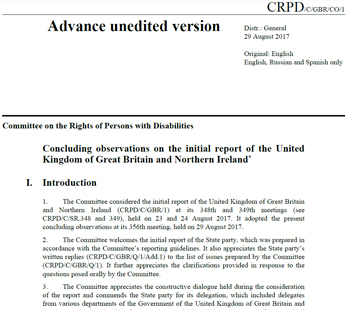 The full documented report into the UK government’s failure to abide by the Convention, and the true experiences of disabled people in the UK released on 29th August is some 17 pages long and contains some 71 recommendations of action needed by the UK government

Widely reported in both print and TV news media, both Channel Four and ITV  news outlets on commercial TV have reported on this issue in some detail.

The (UN’s) CRPD previously said welfare reforms have led to "grave and systematic violations" of disabled people’s rights, findings the Government said it strongly disagreed with.

The committee is now conducting a much wider investigation to assess the UK’s progress in implementing the UN Convention on the Rights of Disabled People, as part of a periodic review all nations signed up to the convention must go through.
Officials have faced two days of grilling from the UN panel in Geneva, which has criticised the UK’s approach.

Major groups including Disability Rights UK and the Equality and Human Rights Commission also warned that disabled people’s rights under the convention are at risk of being breached.

Stig Langvad, the committee rapporteur for the UK, said he was "deeply concerned" about the Government’s failure to act on CRPD’s previous report.

He added: "I could provide a long list of examples where the state party does not live up to the convention."

Whilst Channel4 News ran these news item in its regular 7pm evening slot: 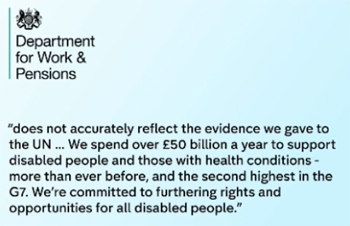 But of course the DWP stance was overtly defiant, arrogant and again totally rejecting of the reality of human suffering their policies are inflicting upon the disabled in the UK.

In claiming the UN CRPD report does not accurately reflect the evidence, they do so simply because the CRPD does not agree with them and that the UN body concluded that the evidence did not actually support the UK government’s attitudes and claims.

The full text of the CRPD report quoted from above, can be read on the UN website: Committee on the Rights of Persons with Disabilities reviews report of the United Kingdom