Whilst hard working CWU members employed by Royal Mail are being told there is no money to give them decent Pay, terms and conditions and Pensions, Moya Green is embellishing her already huge pay and perks package with a 23% increase! 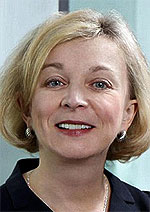 The CEO of Royal Mail Moya Greene’s package of pay and perks is now a staggering annual £1.9 million!

Last year it stood at £1.5m but is now driven up by a new £440,000 share bonus. Yet Royal Mail faces a possible strike over plans to close its final salary pension scheme, as the CWU Four Pillars of Security campaign heads this week into a ballot for industrial action which they are not going to lose!

Whilst CWU members Pension scheme will close down if she has her way; she has received a £200,000 contribution to her pension whilst telling her 90,000 employees that their pension scheme is too expensive to remain open!

Royal Mail insists the current retirement plan has become “unaffordable”. As it closes it down for 90,000 employees, it is easy to understand workers feeling that it is easy to see where the money has gone – into Moya Green’s pocket!

Whilst her salary is unchanged at £548,000, her £43,000 benefits pot includes a car allowance and flights to her native Canada.

Add to that, in her role with Easyjet as non-executive director she started on 1st September; she will be paid a staggering annual £60,000 for only nine days a year set aside for board meetings.

Responding to the criticism of her increased pay package, Royal Mail said: “We understand that executive remuneration is a sensitive subject in the current economic environment.”

Well, if you truly do, give your staff the appropriate remunerations for the profits they bring in; without which your outrageous pay and bonuses levels would be non-existent!

That is the clear message to Royal Mail from the CWU members now being balloted for industrial action!