Is It Time For Labour To Re-Think It’s Stance On Brexit?

With the media once again attacking the Labour Party on several fronts and this weeks sacking of Owen Smith MP from Labour’s front bench for stating what other’s have previously said, that the British public deserve the right to vote in a second EU Referendum; Chris Ingram, web editor writing in a personal capacity, hopes to open up the debate by asking the question very few in our Union seem brave enough to discuss: 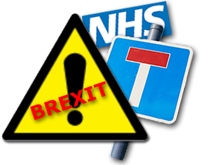 This year on 5th July, we celebrate 70 years of the NHS.

The NHS was given to the nation by a Labour Government in 1948, and the Labour Party has protected it ever since says the narrative of most Labour Party members and no doubt die-hard Labour voters too.

However, the re-organisation of the NHS allowing private healthcare companies to provide NHS Healthcare Services was first introduced by a Labour Government in the 1990s along with turning all NHS Hospitals into NHS Foundation Trusts – an idea first argued for by Tory MPs John Redwood and Oliver Letwin in their 1988 document, Britain’s Biggest Enterprise – as being a prerequisite for allowing hospitals to be independent from the NHS Governing bodies and to utilise their own budgets as they see fit.

Alan Milburn, Labour’s then Secretary of State for Health in January 2002 announced plans to ".. allow the private sector, charities and universities to take over management of England’s failing hospitals."

In 2005, a group of ambitious MPs co-authored a book called ‘DIRECT DEMOCRACY – An Agenda for a New Model Party’ which included major contributions from Jeremy Hunt MP (prior to being made Health Secretary), Duncan Carswell MP, and Michael Gove. The book is extremely hard to find, mainly because it because it quite explicitly lays outs the desire of the authors, including Jeremy Hunt himself, to privatise the NHS.

Page 78 of the book is unequivocal in that aim:

Our ambition should be to break down the barriers between private and public provision, in effect DENATIONALISING the provision of health care in Britain, so extending to all the choices currently available only to the minority who opt for private provision.

Since then of course the privatisation of the NHS is now happening stealthily as a result of a ‘death by a thousand cuts’ in the form of the Health and Social Care Act 2012. And, against a background of a virtual blackout by TV news media and most print media too.

But the real spectre on the horizon is that of Brexit, which will allow the complete privatisation of healthcare in the UK via American healthcare companies and an NHS reorganised along the lines of American Accountable Care Organisations.

Indeed, whereas now US healthcare insurance companies and service providers are not allowed to take over the NHS, after Brexit the UK will be desperate for a Trade Deal with the USA, and as can be seen by their demands in the form of the much hated TTIP deal initially thrown out by the EU, access by American companies to provide healthcare is a basic core principle that the US demands is part of any trade deal.

The idea that any UK Government, would wish to, or will be able to, take the stance that there is no UK/US Trade Deal unless the NHS and UK healthcare services are off the table, is frankly laughable!

The reality of course is that Donald Trump hates anything which equalises the provision of healthcare as can be seen by his repeal of Obamacare.

The US system of healthcare is the most costly and creates an extremely unhealthy country. With no caps on pharmaceutical prices and Big Pharma’s drugs being marketed directly to it’s citizens, along with an over-medicalised culture of healthcare, accompanied by needless surgical procedures and treatments; the NHS will be assimilated into a health economy that generates big profits for a few and actually creates an increasingly unhealthy society for the rest of us.

So, imagine this scenario:

Brexit is completed and the Tories lose power leaving the Labour Government to take over the economic needs of the UK and replace the EU single market with trade deals with other countries, the USA being the most important one.

Labour who currently favour Brexit and the eventual leaving of the single market and the customs union will be faced with having to negotiate a UK/US Trade deal and as a part of that, allowing US Healthcare companies to bid for NHS Contracts and to allow future take over and even ownership by these companies of NHS Hospitals, GP Surgeries and then naturally, the introduction of an American healthcare insurance system.

That is the biggest risk with Labour’s stance on Brexit at the moment and despite claims to the contrary, a Labour Government will not be able to get a trade deal with the USA without the NHS being part of any deal!

In that event – the party that gave this country the NHS, may well be the Government that takes it away!

The Asset Stripping Of The NHS Tories Will Implement