Two weeks after having a stroke, Israel’s most defining political leader and Nobel peace prize laureate, Shimon Peres, has passed away aged of 93. 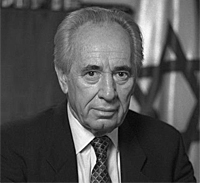 He had been twice elected prime minister of Israel and later as its ninth president.

He was best known for being one of the key architects of the Oslo peace accords, for which he was jointly awarded the Nobel peace prize with the then Israeli prime minister, Yitzhak Rabin, and Yasser Arafat, the chairman of the Palestine Liberation Organisation.

He had been seriously ill on a respirator in an Israeli hospital near Tel Aviv and died after his condition deteriorated sharply.

Labour Conference this morning paid tribute to him in a standing 1 minute silence: