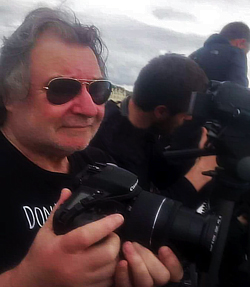 The media attacks on Corbyn orchestrated when he was first elected back in 2015 by the ‘usual suspects; The Sun, The Daily Mail, Daily Telegraph and led on by both Sky News and the BBC’s political and news programmes; now continue throughout the General Election 2017 campaign coverage to vilify and slander Jeremy Corbyn.

Indeed, despite there being half a dozen journalists and ITN camera crews covering the last major Corbyn rally at West Kirby in the Wirral, not one single TV news outlet covered in their new reports that day, what was a massive rally on the beach with 4,000 people attending to listen to Jeremy first hand rather than believe the garbage in the media. 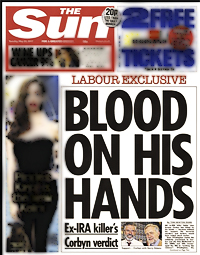 But the outrageous slander and libel being thrown at him, has found sudden new life following the appalling tragedy of the Manchester Bombing, and the London attacks. The most egregious headlines that Murdoch’s brand of toilet paper called The Sun, issued this headline within 3 hours of the blast at the Manchester Arena: Blood On His Hands.

This resulted in widespread condemnation of the paper and calls in Manchester for their city to ban the Sun, following on from Liverpool City Council’s support for the ban on the rag from being sold in Merseyside with many organisation such as Merseyrail refusing to stock it in their food and drink outlets.

But the depths to which tax-dodger Lord Rothermere’s Daily Mail and Murdoch’s Sun; went to: is both distortions of facts and libelous.

The Daily Mail devoted no less than 13 pages of it’s edition to lies and deformation against both Jeremy Corbyn and his shadow chancellor John McDonnell.

Very worrying for democracy, when you realise, that both tabloid papers follow the Nazi principle first discussed in Hitler’s Mein Kampf, that the more you repeat a lie, the more it is believed. The bigger the lie, the easier it is believed!

Given that in the case of the Daily Mail which supported Hitler and his Nazis in the 1930s, their stance does not surprise anyone. As for Murdoch, well basically he is a megalomaniac and wishes to dominate the political world in it’s entirety.

Previous to this Sky News’ journalist Sophy Ridge had interviewed Jeremy Corbyn shortly after the launch of Labour’s manifesto. Her 16 minute interview was to feature what she was hoping would be finally proving Corbyn is an IRA sympathiser, but didn’t go to plan!

Furthermore, the recording of a conversation between Sky’s Faizal Islam and a fellow reporter outside Number 10 just 30 mins before May gave her response to the bombing in Manchester; exemplifies the coercion and bias amongst news media journalists to slander Corbyn and affect the outcome of the General Election in favour of the Tories.

This went viral on social media within moments of it being discovered and tweeted by Dan Lewis, Chair of the CWU’s North West Regional committee on his own account.

On Friday 26th May 2017, following the Manchester bombing, Jeremy Corbyn gave a very brave speech on the day of the resumption of the General Election campaign by all political parties in which he addressed the organised attacks upon him by the media.

The Sun in particular had once again falsely attacked him, even before he gave his speech later that day, accusing him of ‘blaming Britain’s war on terror for Manchester terror attack.”

Here is what Jeremy Corbyn actually did say:

“We will also change what we do abroad. Many experts, including professionals in our intelligence and security services, have pointed to the connections between wars our government has supported or fought in other countries and terrorism here at home.

That assessment in no way reduces the guilt of those who attack our children.

Those terrorists will forever be reviled and held to account for their actions.

But an informed understanding of the causes of terrorism is an essential part of an effective response that will protect the security of our people that fights rather than fuels terrorism.”

You can watch the relevant section of his speech below:

On 12th May 2017, academic research provided further proof, if any was needed, that the media is not only biased against Corbyn and the Labour Party, but that they openly promote the Conservative agenda.

The report by Loughborough University is a series of investigations, with the first part having been published that week.

The results in the report were derived from detailed content analysis of election coverage produced on the weekdays (i.e. Monday to Friday inclusive) between 5th and 10th May from the following news outlets:

The key findings of the report is quite telling to say the least:

This came to light via a BBC blog from an editor of the Daily Politics show, but was shortly taken down afterwards and also quickly followed by the Google search cached version. 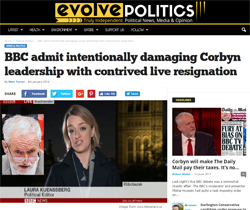 The blog made it clear that Andrew Neil had first suggested the idea to Laura Kuenssberg, who was reported to have thought “it was a great idea”, knowing full well it would inflict maximum damage on the Labour leader having Stephen Doughty announce his resignation just five minutes before Prime Minister’s Questions.

Independent news outlet, Evolve Politics, posted a news item on these events and on the whole question of the bias of the BBC, concluding:

“It is baffling how relentless and incessant the coverage of Corbyn’s reshuffle was in comparison to the hundreds of reshuffles that have taken place over the years.

It is an unmistakable slap in the face to the vast majority of viewers who want to see impartiality, balance of opinion and an unbiased BBC.”

“Exactly the same situation exists today 12 months later during this election month, with the media wanting to make this whole election as one which is based on the ‘cult of the personality’ and wanting to turn this election into some X-Factor Game Of Politics based on celebrity style reporting instead of a serious exercise in democracy which has far reaching consequences for the British people for generations to come.” 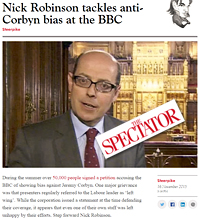 Even the BBC’s ex-political editor Nick Robinson wrote in 2015 to his BBC colleagues reading the bias against Corbyn and told a Sunday Times reporter when asked whether he was ‘shocked’ by the way the BBC ‘rubbish Jeremy Corbyn’, replied:

‘Yes. Oddly, although I was off work, I did drop a note to a few people after his first weekend saying this is really interesting and we owe it to the audience to sound as if we’re interested.’

‘Even though I was off work, I was so frustrated that I couldn’t cover Corbyn’s election, I took myself off to a Corbyn rally. My wife thought I was very sad, but I thought, I’ve got to go and see this for myself!’

Turn now to January 2017, and the BBC Trust was forced to admit that Kuenssberg was inaccurate when she inaccurately reported Jeremy Corbyn’s views about shoot-to-kill policies in the aftermath of the terror attacks in Paris.

But the media frenzy and panic about Jeremy Corbyn began as soon as he was first elected back in 2015.

In November 2015, the Media Reform Coalition produced research which showed that newspapers overwhelmingly sought to attack Corbyn’s leadership credentials from the moment he was elected. 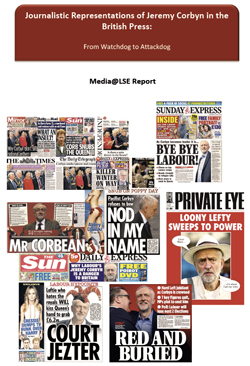 Completed in June 2015, and in conjunction with Birkbeck University of London, the London School of Economics published research based on a more extensive analysis of newspaper coverage that reached similar conclusions conducted a real-time analysis of this coverage over a crucial 10-day period following the first wave of shadow cabinet resignations and finishing on the day the Iraq War Inquiry was published.

The report noted that ‘the vast majority of the British newspapers situated moderately to firmly on the right of the political spectrum, the analysis of the data points to a strong ideological bias. The right wing newspapers were particularly negative and acerbic towards Corbyn.’

The main conclusions of the report based on 465 online articles and 40 prime time news bulletins having been assessed were:

* Twice as much airtime given to critical, rather than supportive voices

The report and it’s Executive Summary conclusion may well have been written today May 2017, and with the same scathing conclusion about the press media in this country:

‘To conclude, the degree of viciousness and antagonism with which the majority of the British newspapers have treated Corbyn is deemed to be highly problematic from a democratic perspective.

If, as the British philosopher Onora O’Neill (2002) also argued, the
high degree of media power needs to be accompanied by a high degree of media and democratic responsibility, is it then acceptable that the majority of the British newspapers uses its mediated power to attack and delegitimise the leader of the largest opposition party against a right wing government to such an extent and with such vigour?

By posing this question in the way we do, we also imply that this is not merely a political question, but also an ethical and a democratic one. Certainly democracies need their media to challenge power and offer robust debate, but when this transgresses into an antagonism that undermines legitimate political voices that dare to contest the current status quo, then it is not democracy that is served.’

Web editor Chris Ingram wrote on his Face Book status on the morning following the tragedy in Manchester:

I am deeply depressed, not only for the poor families of those who lost their lives, but also the media and the Tories will use this tragedy to accuse Jeremy Corbyn of being soft on terrorists, or even being an IRA sympathiser. 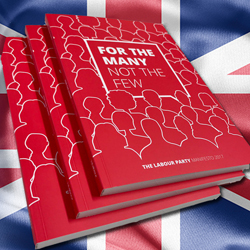 Theresa May, knows she is losing the argument on the NHS, the pensioner’s triple lock, and produced a manifesto uncosted and vague, hiding her true intentions to raise Vat, National Insurance, and income tax, not to mention abolishing worker’s rights; and sell off the NHS to American private health care as part of a UK/US trade deal.

Just as Thatcher used the Falklands to save her premiership, she and her media organisation of the right-wing press and biased BBC and other TV news outlets will use the Manchester bombing to claim only she can beat terrorism and make a success out of Brexit!

The question is; will the British voter believe in her policies as they believed in Thatcher’s?