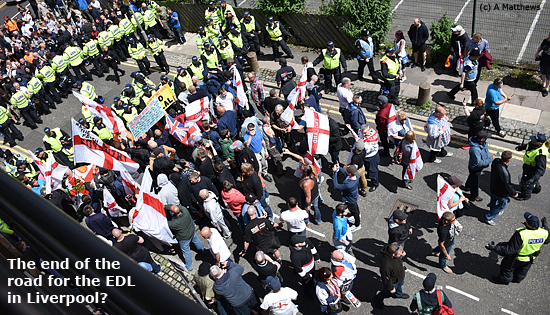 We were there Saturday 3rd June!

Greater Merseyside & S West Lancs (now Greater Mersey Amal) Branch Assistant Secretary (T&FS) Angela Teeling reports from the front-line against the fascist and racist group calling themselves the ‘English Defence League’ who turned out more like a back street kick-around group of boys than a team in the football league. 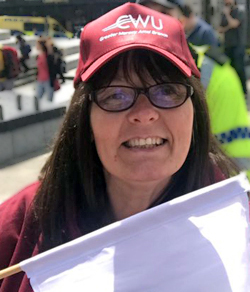 In addition, additional pics from a former telecomms worker, Alan Matthews, appear at the end of this article.

The fascist English Defence League (EDL) were humiliated on Merseyside. The EDL had cynically called a demonstration in the city, after the Manchester attack, in order to try to regroup and scapegoat Muslims. They picked on the wrong city.

The EDL were stopped from marching to Derby Square in Liverpool, by a protest called by Merseyside Unite Against Fascism [UAF]. 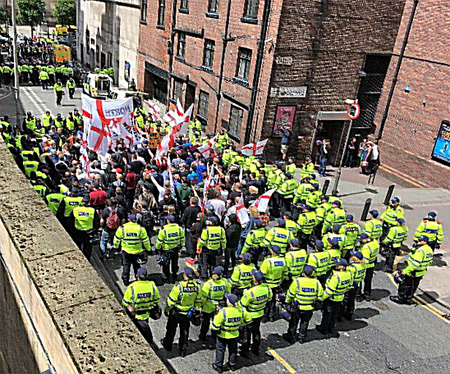 Well over 1000 people joined UAF’s protest, alongside other anti fascists, which completely outnumbered the
EDL demo which mustered at most, 70 people from across the country.

Police presence was heavy, with officers from all over the region: not wishing a replay of last year when the EDL got cornered outside Saint George’s Hall where they defaced the building by drawing swastikas on its external walls and caused other damage to the building. 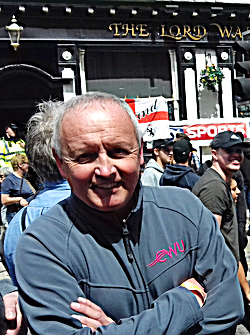 While the EDL bussed people in from outside of Liverpool, the Merseyside demonstration was made up of people from the area. The FBU, PCS and CWU brought brilliant delegations along throughout the day.

After being escorted by huge numbers of Police from Lime St to the Lord Warden pub, where they were confronted by hundreds of anti fascists the EDL attempted to continue their protest, but their march was cut short near
Lime Street as well over 1000 protestors stood in their way. The EDL were composed of ex Combat 18 thugs and sundry, racist individuals. Ex Nick Griffin minder, Alan Spence, rubbed shoulders with someone who carried a Loyalist, paramilitary banner, from the UVF. 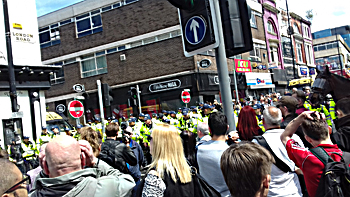 The ingenuity, boldness and imagination of anti fascists was tremendous. School students, Councillors, the local James Larkin Society, OAP’S, veteran anti fascists, all united in their determination to make sure that No Pasaran was a reality.

It was moving too to see the number of Justice for 96, Hillsborough, banners carried by campaigners. Merseyside ex-dockers also joined the crowd. They all succeeded! 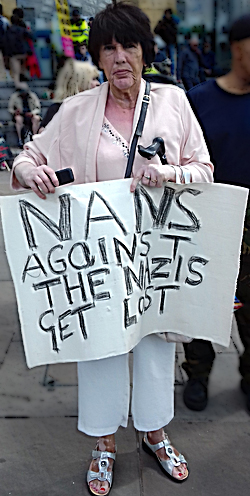 There were many ‘wonderful’ moments eg pensioners scooping up horse manure and dispensing it on EDL members. Egg throwing was a ‘delight’. None by our members.

A mass sit down at Lime St, opposite St  Georges Hall, led by a brave woman, was a precursor to blocking the EDL. Anti fascists sang Beatles and John Lennon songs like Imagine, Get Back, Another one bights the dust, among other examples of great Scouse wit. After roughly 40 minutes, it seems that police told the EDL they were unable to force them through the huge crowds.

Merseyside had turned out for the fourth occasion in recent times and stopped the fascists.

It was a great moment when the EDL had to turn around and eventually start their bedraggled crawl back to Lime St station. The cheers echoed around to the sound, to gales of laughter, of the theme tune of the Benny Hill show.

The EDL look demoralised and very nervous. Anti fascists ensured that the EDL were harried on their way. The fascists looked like the small group of racists that they are. The looks on their faces said it all.

“Well done to the
people of Liverpool!  The fascists said that they were going to march through Liverpool but we stopped them. Years of consistent, broad-based campaigning has pushed the EDL back from the point where they once mobilised
thousands, to where they could only muster a pathetic
gang of at most 70 fascists from out of town on a national demonstration”. 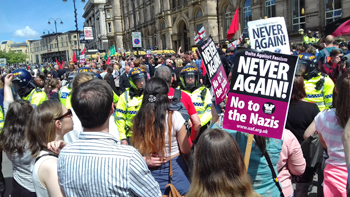 Despite what you may have read in the press or heard on the radio, the general mood of the day was pleasant.

In-between chanting it was a very friendly atmosphere with people sharing bottles of water and apologising if they pushed each other, naturally the EDL were venomous and their mood did not reflect how we all treated each other.

There were women and even children among them shouting racist and general abusive statements at us all. They let off loud bangers to intimidate people which echoed as the sound bounced off St George’s Hall and the buildings opposite.

“It’s fantastic what people in Liverpool have done today.
Yet again, Merseysiders have ensured the fascists have not passed. I congratulate Merseyside UAF and all who have worked so hard to ensure today has been successful. The EDL are small but wish to grow on the back of the terror attacks. We will not allow them to.

Their fascist poison will be opposed by us at every step. Racist divide and rule must be resisted by anti-fascists”. 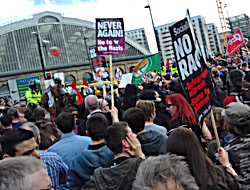 The EDL, following the appalling attack in London on Saturday, have called a march on Parliament on June 24th.

Their Merseyside defeat seriously undermined their meagre forces, they will hope to try to come back. UAF has called a demonstration to say that racists like the EDL will not divide us in the wake of the terrible attacks. We ask anti fascists and anti-racists to join us in London, on June 24th, details below.

On my way home I had my car window down, at the lights a police van pulled up next to me. The police also had their window down, noticing my wrist band (given out in case you had got arrested, it had a solicitors contact details on it) they said it had been a good demonstration and that we don’t want those fascists in our city. 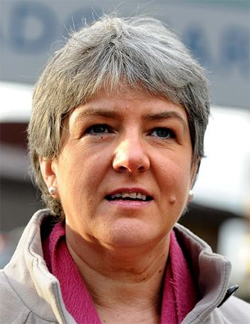 Yet when Jane Kennedy (Merseyside Police and Crime Commissioner) was on radio Merseyside she blamed the people of Liverpool for making policing the event difficult. Saying we turned up in too large a number to protest against the EDL march, that we should have simply allowed the police to do their job and let the EDL walk through the city of Liverpool.

I wonder what her thoughts would have been if it was a group of people on their way home from a football match, in a pub smoking then roaming the streets letting off bangers, while drinking cans of beer, throwing cans and pennies at people and shouting obscenities at everyone who dared look at them.

Some photos from the day of branch members and former members:-

THE EDL PICKED ON THE WRONG CITY 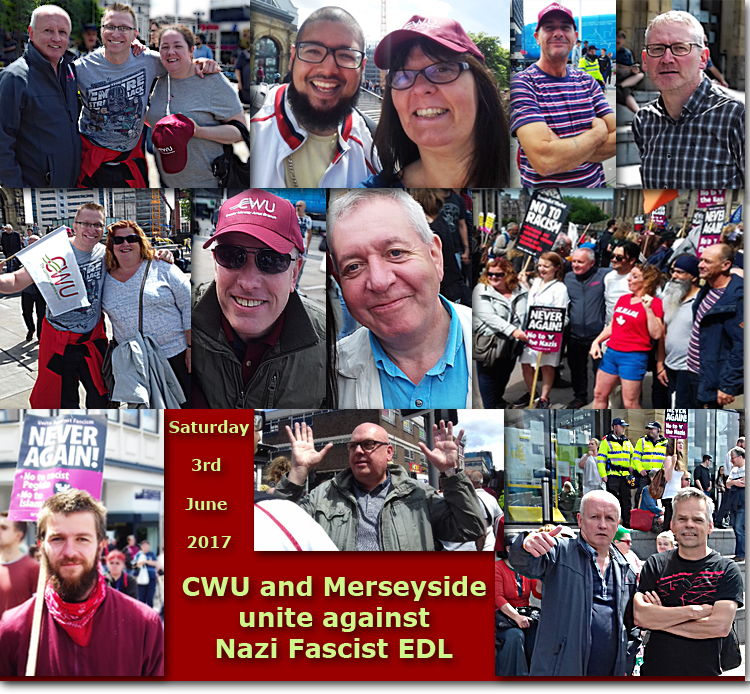 Alan Matthews, a member of BECTU, supporter of this website, and a former Telecomms worker; sent in some pics he took of the event from his living room window on the day!

"Being unaware of the event, and I was sat quietly with my wife comtemplating our afternoon’s outing to our local restaurant, when we both suddeny heard a loud commotion outside in our street just off London Road.

Seeing from the window that it was the police and a small group of EDL supporters I estimated as around 80 max, I grabbed my camera and took a number of photos of the marchers and police ensuring the barriers at the end of the street stopped the EDL marchers from taking a different route on their demonstration, turning them back onto London Road adjacent to the pub they had just left.

Had they got lost, I pondered? Afterall there were few members of the public at the bottom of the street to see their pathetic attempts at inflaming public hatred against those they considered not to be English.

It seems the end of the road for the EDL in Liverpool, was at the end of our road!" 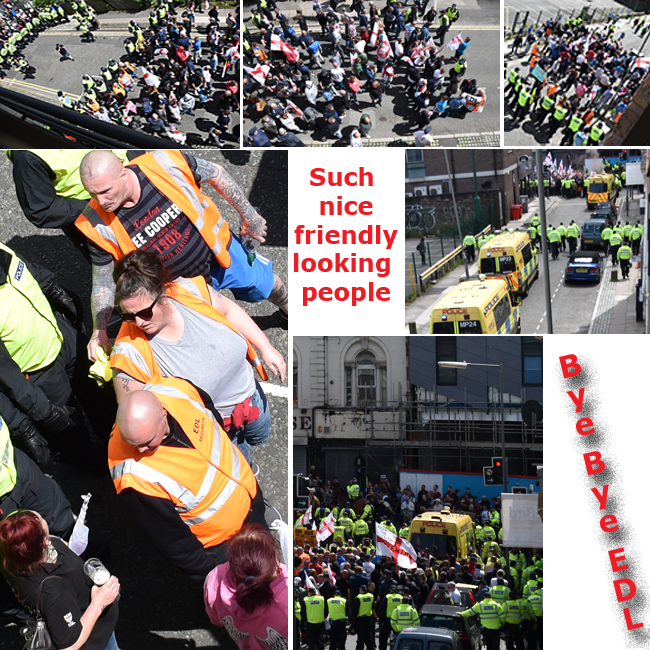