Alarmingly mouth cancer contracted via oral sex is also on the increase!

With the season ‘to be merry’ approaching, the booze and the ‘dating game’ both pose a risk to the sexual health of young people visiting or living in parts of the North West.

The latest figures on sexual health shows that Greater Manchester and Merseyside in particular Have amongst the highest rates of sexually transmitted infections (STIs) in the country.

Chlamydia, genital warts, gonorrheoa, herpes and syphilis are among the most common diseases spread through sex. 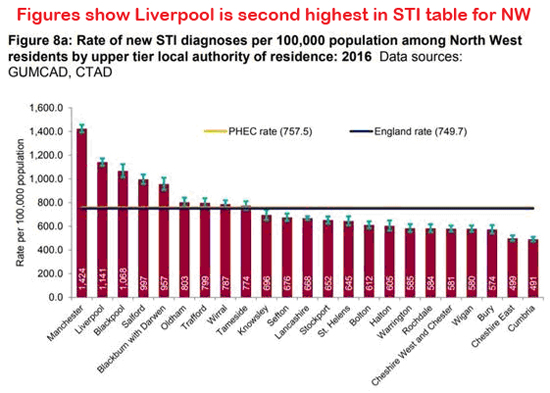 Public Health England data abovce shows STIs diagnosed across the Region last year alone, one of the highest levels on record, along with an alarming rise in the number of mouth cancer incidents caused by oral sex.

The most common infection is one that was almost unheard of in the 1980s; chlamydia, which can cause pain urinating and unusual discharge.

Given that official figures show a doubling in the number of young people living in the City Centre of Liverpool alone with 75% being under the age of 30 and the tens of thousands of students, Liverpool Sexual Health said it was not surprising to see the city’s STI levels were higher than average.

The Liverpool Echo reports Dr Mark Lawton, a leading member of the British Association for Sexual Health & HIV, and Clinical Lead at the Liverpool Centre for Sexual Health as stating that STI infections are more common in cities, and particularly ones with high numbers of young people; as they were more likely to have more regular unprotected sex with a wider range of partners.

The figures work out as one STI for every 88 people in the city – a rate twice as high as England as a whole.

Despite the fact that nationally the number of STIs being diagnosed has been falling for years, Liverpool saw 5,462 cases diagnosed last year, with 2,526 in Wirral, 1,850 in Sefton 1,146 in St Helens and 1,024 in Knowsley. 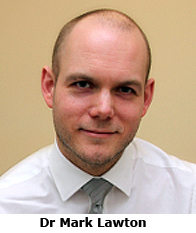 “It’s not good to see increased rates, though it doesn’t surprise me Liverpool is higher than average as cities tend to be.

Gonorrheoa has been up in recent years and so has syphillis, but chlamydia and genital warts have both declined.

It’s probably to do with people having more sex with more people and the acceptability of casual sex, though it could also be increased testing and diagnosis.

We are not going to stop people doing that, but we provide condoms free, encourage people to use contraception and the most important – to be tested regularly.
People often don’t use condoms in the heat of the moment, and with some STIs like chlamydia there can be no symptoms. So your partner may have got it from someone else and only found out later.” 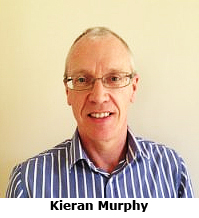 To address the issue, there are key actions needed to be taken from high-quality relationship and sex education in schools to strengthening prevention activities focused on groups at highest risk. We need to make sure people are aware of the risks and the actions they can take to protect themselves from the risk of STIs.

No matter what age you are, or what type of relationship you are in, it’s important that anyone having sex with a new or casual partner practice safe sex and take up the offer of regular STI checks.”

As if this isn’t bad enough for people on Merseyside, the numbers of people developing mouth cancer is also in the increase and remains amongst the highest in the North West.

The NHS believes this is due to oral sex and explains the sharp rise in young people with mouth cancer. Figures show more people are suffering from mouth and throat cancers in Merseyside and Cheshire than the rest of the country. The numbers are still increasing at a greater rate than elsewhere. Worryingly, patients locally are also more likely to die from the conditions.

We know that mouth cancer is often caused by smoking and alcohol, but a sexually transmitted infection called the human papillomavirus (HPV) is also increasingly to blame. A small number of high-risk strains of HPV can cause cancer in the mouth, cervix, vulva, vagina, anus, penis and tonsils.

People in some parts of Merseyside are four times more likely to have mouth or throat cancer than the national average, with Birkenhead, Bootle, Halton and Knowsley having some of the highest rates of oral cancer in the region.

The more we can do in the North West to raise awareness of these cancers along with information on how to reduce risks and recognise the symptoms, the less people will need treatment and the more lives we can save.”

“Oral cancer is a growing health care concern for the NHS yet over 90% of oral cancers are preventable.

If oral cancer is diagnosed early survival rates are good; delay is costing lives. It is vital that dentists, dental teams and their patients understand the importance of their role in relation to prevention, early detection and referral.”

Just what are the symptoms of oral cancer?

Symptoms include red or red and white patches in the mouth, ulcers or swellings that do not heal after three weeks, pain while swallowing and a feeling something is stuck in the throat.
How common are HPV and oral cancer?

Around 11,400 mouth, tongue and other rarer head or neck cancers were diagnosed in 2014.
Cancer Research UK figures suggest around 1 in 75 men and 1 in 150 women will be diagnosed in their lifetime, but rates are expected to rise by a third by 2035.

HPV infections are a lot more common, with most people reportedly exposed to them by the age of 25.

But most HPV strains have no cancer link and very few people infected develop the disease.

The infection is usually cleared naturally by the body within two years.

Visit the Sexual Health Liverpool website for help on symptoms and where to get checked.