As such, it really needs to be listened to. 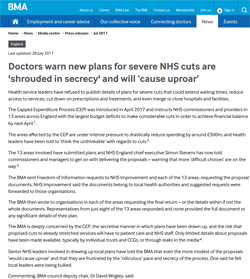 At the end of July, the BMA issued the following press release in relation to the swingeing cuts being made by the Tory Government. Whilst not mentioning a possible UK/USA Trade Deal which will have to include healthcare services and the full-blown privatisation of the NHS, facilitated by the sale of all of its hospitals and buildings to private companies; it is clear that these cuts being introduced will have a devastating impact upon patient care and safety.

Here is what the BMA had to say on the issue:

Health service leaders have refused to publish details of plans for severe cuts that could extend waiting times, reduce access to services, cut down on prescriptions and treatments, and even merge or close hospitals and facilities.

The Capped Expenditure Process (CEP) was introduced in April 2017 and instructs NHS commissioners and providers in 13 areas across England with the largest budget deficits to make considerable cuts in order to achieve financial balance by next April.

The areas affected by the CEP are under intense pressure to drastically reduce spending by around £500m, and health leaders have been told to ‘think the unthinkable’ with regards to cuts.

The 13 areas involved have submitted plans and NHS England chief executive Simon Stevens has now told commissioners and managers to get on with delivering the proposals – warning that more ‘difficult choices’ are on the way.

The BMA sent Freedom of Information requests to NHS Improvement and each of the 13 areas, requesting the proposal documents. NHS Improvement said the documents belong to local health authorities and suggested requests were forwarded to those organisations.

The BMA then wrote to organisations in each of the areas requesting the final return – or the details within if not the whole documents. Representatives from just eight of the 13 areas responded and none provided the full document or any significant details of their plan.

The BMA is deeply concerned by the CEP, the secretive manner in which plans have been drawn up, and the risk that proposed cuts to already stretched services will have to patient care and NHS staff.

Only limited details about proposals have been made available, typically by individual trusts and CCGs, or through leaks in the media.
Senior NHS leaders involved in drawing up local plans have told the BMA that even the more modest of the proposals ‘would cause uproar’ and that they are frustrated by the ‘ridiculous’ pace and secrecy of the process. One said he felt local leaders were being bullied.

“These plans could have serious consequences for doctors working on the frontline and for the care and treatment patients receive and can expect in hospitals and GP surgeries in these areas. 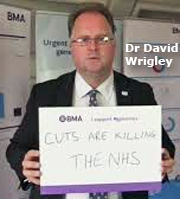 It is bad enough that brutal cuts could threaten the services but it is totally unacceptable that proposals of this scale, which would affect large numbers of patients, are shrouded in such secrecy.

Patients, the public and frontline staff – who have worked so hard to keep the health service afloat through years of underfunding in the face of rising demand – must be at the heart of any plans for the future of the health service but we are all frozen out of discussions, and local health managers are being asked to push forward despite being unwilling to share their decisions openly."

Warning the Government on the issue of patient care and safety, he added:

“This government must stop and think before pressing ahead, as cuts on this scale in this timeframe would have a devastating impact on patients and staff. Our NHS is one of the very best healthcare services in the world, with hugely talented staff but it relies too much on the goodwill of the staff who dedicate their lives to helping patients. This simply cannot go on. The government must provide adequate funding for the health service before it is too late.”

Speaking anonymously the BMA, one trust chair with oversight of the process of drawing up the plans in his area, said:

"We were descended on and asked to think the unthinkable in no time at all. The NHS seems to go into a zone of secrecy as an automatic reaction. That’s the thing that really upsets me – the secrecy of it all and the ridiculous pace in which solutions are to be crafted and agreed. It’s the management culture too – it’s all hierarchical power and bullying. Even the most modest proposals would cause uproar.”