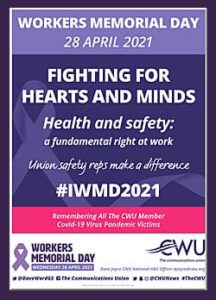 This is an important day in the Trade Union calendar. It is always a poignant event, but in the year dominated by Covid, the significance has been magnified by the increased passing of ordinary working people, many of them key workers. 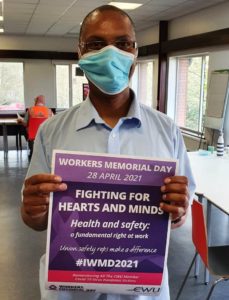 our efforts to secure a safe working environment for everyone in the future.

Dave Kennedy North West Regional Chair opened the online event and thanked everyone for taking the time to attend the CWU North West Regional Event to pay our respects on International Workers Memorial Day. Dave went on to say “Today, we join with others around the North West, the UK and indeed the world to remember those we have lost due to work related injuries or diseases. Every year – more people die at work than they do in Wars. Generally, as a result of the people with legal duties to protect us at work failing to carry out those duties in favour of profit and greed.

We all have a duty to make our workplaces safer and today is the day where we not only remember our dead but commit to providing safer work for existing employees and for our Children and Grandchildren as they enter the world of work.

It is a fact that Unions make work safer and Unionised workplaces are safer workplaces.

Today we pledge to continue that work and to protect that record”.

We then introduced our guests for the day, Navendu Mishra MP and Cllr Janet Mobbs who will be unveiling a memorial plaque on behalf of the Union.

and Janet are committed Trade Unionist and a long-time friend of the CWU, and we’re really pleased that they were able to come along and join us.

At this point of the event, we were asked to turn our cameras off and proceeded to hold a minute’s silence paying respectful remembrance to all those who have lost their lives because of work or through work related failures in responsibility.

We then proceeded to the unveiling of our plaque by Navendu and Janet, which went brilliantly considering we were performing the event live on Zoom. 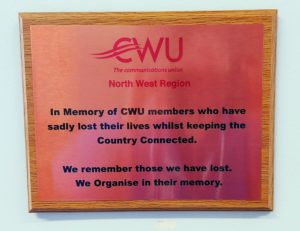 Navendu then addressed the attendees speaking about the importance of trade unions, who stand up and represent their members right across this country for fair pay, terms and conditions and safety at work.

He also went on to say “IWMD serves as a reminder of the work that we need to do to make sure that health and safety legislation is both strengthened and even just adhered to, and to raise awareness about how workers can protect themselves in their workplaces.

The struggle for health and safety regulations was long-fought and still each year, more than two million men and women die as a result of work-related accidents and diseases, workers suffer approximately 270 million accidents and one worker dies every 15 seconds worldwide.

This is why it is so important to both remember and continue to fight for better protections in the workplace. Over the years, it has been trade unions that fought to protect workers by negotiating to make work safe and to have lobbied for compensation for the families of those who have lost their lives”.

We then moved on to the closing remarks where I thanked Navendu and Janet for coming along today, I also thanked Dave Kennedy and Carl Webb who had worked alongside myself in organising the regional days activities.

I went on to outline other events which were taking place across the region later in the day by North West TUC and Greater Manchester Hazards. The Greater Manchester online event was attended by Emma Garner, Karen Kendrick and myself on behalf of the CWU NW Region. 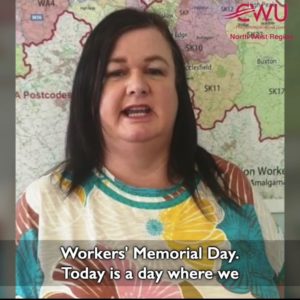 We had lots of communications going out across the regional social media platforms and I would like to express my thanks to Claire Phillips (CWU ASR North Central Amal Branch), John Marsh (CWU BT North West Health and Safety Chair/Officer) and Jamie McGovern ( CWU ASR Greater Mersey Amal Branch) for their fantastic videos.

Jamie McGovern sits on IWMD Merseyside Organising Committee and their event took place at the Titanic (Engineers) Memorial in Liverpool:

Merseyside IWMD 2021 was an invite only event due to Covid restrictions, although slightly short on norm 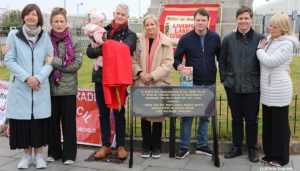 al numbers the people who needed to be there were there.

All attended to pay respectful remembrance to all those who have lost their lives because of work or through work related failures in responsibility.

‘’THOSE WHO PUT PROFIT ABOVE WORKER SAFETY SHOULD NEVER GO UNCHALLENGED’’

Up to 50,000 people die each year in the UK from work-related ill health and accidents which makes the words of the late Tony Muhearn more powerful than ever and it is only right we as trade unionists keep these words at the forefront of our minds when challenging unsafe work.

My final words were around the theme of this year’s workers Memorial Day which were that everybody has Fundamental Right to Safe and Healthy Work.

I went on to say “Every year more than 50,000 people die in the UK because of exposure to hazardous substances, chemicals and toxic workplaces, they die in incidents in the workplace, on the roads, at sea or from air crashes or on the railways and they die from work related suicides. This year we will also remember the 14,000 workers who have died because of Covid-19”.

“The Covid 19 pandemic has exposed an occupational health crisis in workplaces worldwide. Workers are routinely denied even basic health and safety protections, these same problems existed before the pandemic and resulted in millions of deaths each year from work related injuries and diseases”,

“The CWU North West Region sends a message that health and safety protection at work must be recognized as a right for all. We renew our efforts to organise collectively to prevent more deaths, injuries and disease as a result of work”.

“We remember those we have lost. We organise in their memory”.