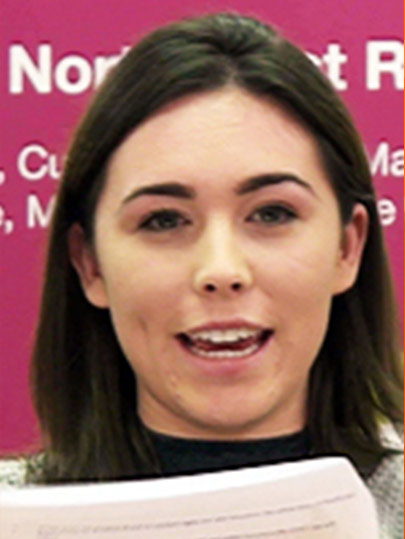 On 10th April, I went along to the North West retired members forum in Manchester.

I was representing the branch and the North West young workers committee. Some may find it strange that I went along to this, but I felt it was needed, not only to support the North West retired members but also to find out some issues they are facing within the union and in society in general.

It may be a long way off before I retire but there will be a time when that will come.

Jake opened the forum and welcomed everyone.

He introduced the guest speakers and thanked them for attending to speak at the forum. Jake informed the delegates how important it is these forums take place, for the North West retired members to spend time together and listen to information from guest speakers.

Jake said: “Pensioners are a valuable part of the community”.

Jake commented that the retired members committee want to build on this forum each year and hope it gets better and better.

The first speaker was Margaret Greenwood MP, the shadow secretary of state for work and pensions. She spoke passionately about how the current government are treating the pensioners in society and how important it is we stand up for our social security.

Margaret said: “It is so important we stand up for our social security system”.

Margaret answered some tough questions from the forum, including one about the WASPI women and what the Labour government have in place regarding that.

We then heard from Jan Shortt who is the General Secretary of the National Pensioners Convention. She spoke about the future generations and how pensioners need to get it right for their children, grandchildren and great-grandchildren. Jan: “We have a whole issue for the generations that come after us”. Jan then spoke about the work the NPC does and how important it is to start recruiting younger pensioners to the NPC, as they don’t want the work they are doing now to be pointless if no one in the future is there to carry on the good work and representation.

Jan said: “The members of today are the pensioners of tomorrow”. Jan also informed us of the work the NPC have been doing and said the priorities for this year are pensions and social care.

We then heard from Tony Kearns, the CWU SDGS who is also responsible for CWU Retired Members. Tony thanked Jake and the North West Retired Committee for inviting him along to speak at the forum.

Tony said: “We should stop using the word benefit and start calling it what it really is, social security”. It was a great contribution from Tony, not only for how important the retired members are within the CWU but also in society and the challenges they are facing. He spoke about Redesign and its importance in securing the union for the future and making the changes now.

Tony encouraged all members to go to the branches with ideas and suggestions and make sure the branch send them back. Tony finished by reminding Jake: “You might not be the future, but you can shape the future”. This quote resonated with me as it was a perfect way to remind the retired members just how important they are to the union and how they might not be the future but they are just as important as any other members within the CWU.

I really enjoyed attending this forum and I loved hearing the speakers.

The highlight of the day was hearing Tony Kearns speak about the CWU’s perspective of retired members. The forum opened my eyes to the challenges retired members are having within society, how the government is trying to turn young people and pensioners against one another and how important it is that we all stand together and fight this injustice.

I would advise any member to go along to the next retired members forum as it really did open my eyes and you can hear first-hand the issues that they are facing, rather than what the media/papers want to try and make us believe.

Thank you to all the retired members for having me at the forum.