A mixture of Brexit and this Tory Government’s intentions regarding worker’s rights exemplified by the Trade Union Act which comes into force in the next couple of months, and the stated intentions by various government minister in suggesting that all the ‘EU red tape’ regulations on business including health and safety, food safety, environmental protection, not to mention agency rights, sick pay and the social chapter; can be abolished in one huge measure under the proposed Great Repeal Act on leaving the EU, will mean the Trade Union movement will simply become a pressure group! 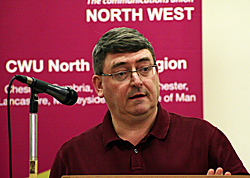 "The Great Repeal Act will get rid of all the [EU] Directives that underpin everything that we value most. If we do not have a British alternative, you will have nothing, that is a fact!"

"Consultation rights on anything you want to do in terms of getting the voice of the working folk that we represent across to the employer, will deminished to the point of the Trade Unions being diminished to the level of a pressure group. That’s a fact!"

Following the AGM’s of the regions various committees held in the morning sessions, Committee Chairpertson’s presented to the 90 delegates assembled a review of their committee’s findings and their key priorities for the next 12 months.

You can watch Ian’s full presentation below: