Ofcom has today (1st March 2017) issued a press release announcing it’s completion of the latest comprehensive review of Royal Mail and its delivery of the universal postal service.

The CWU has responded with a cautionary welcome to Ofcom’s review document which you can read by clicking on the link at the bottom of this page.

As the postal regulator, Ofcom secures the universal postal service. This requires Royal Mail to deliver to every address in the UK, six days a week, at a standard price, and is relied upon by millions of people and businesses.

The universal service had been under significant pressure, incurring a loss of more than £100m in 2011, as people continued to send fewer letters. 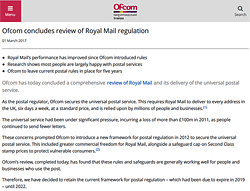 These concerns prompted Ofcom to introduce a new framework for postal regulation in 2012 to secure the universal postal service. This included greater commercial freedom for Royal Mail, alongside a safeguard cap on Second Class stamp prices to protect vulnerable consumers.

Ofcom’s review, completed today, has found that these rules and safeguards are generally working well for people and businesses who use the post.

Therefore, we have decided to retain the current framework for postal regulation – which had been due to expire in 2019 – until 2022.
Ofcom’s review has also concluded that:

Ofcom has decided not to impose new controls on Royal Mail’s wholesale or retail prices, as the company already has strong commercial incentives to improve its efficiency.