In London where most trains are driver only, they recorded 10,719 criminal offences on trains across the capital during 2015/16 – up from 9,599 the previous year. Sexual offences against women rose particularly sharply year on year, from 382 to 623.

Current Merseytravel chair Cllr Liam Robinson clearly does not concern himself with that – so it is a good job that the RMT Union does!

With industrial action taking place again this week, and with the full understanding of the Merseyside traveling public, Merseyrail are now appealing to the public over the heads of their workforce with public posters on network train platforms and today by emailing their customer’s to become involved in a ‘consultation’ exercise on 28th October via the internet!

Every week incidents were guards on trains have been essential in helping the public traveling on the Merseyrail network, are hitting the local news media outlets.

From helping Mum’s with their children, to saving lives, and avoiding sexual harassment or even worse, sexual assault; it is clear to everyone except Merseytravel, and Councilors on the Boards of both Merseyrail and Merseytravel, that with currently two ‘safety critical’ staff on the trains at the moment; withdrawing one of them – the train guard – will reduce safety for passengers and increase the risk of harm and injury.

Whilst the management claim that there will still be staff on trains to help the public, all at far lower pay rates than guards; the question is are Merseyrail expecting train cleaners, ticket checkers and other non-safety trained or safety crucial staff to take on the roles and responsibilities of train guards in terms of passenger safety and security; but at a far lower rate of pay?

Worse still, these proposed staffing levels will only occur after 8pm!

If it were not for the trained eye of a train guard, the possible sexual assault that a passenger was saved from last month, would not have been spotted and action taken. Nor would a life have been saved or the distress of an autistic child minimised by a supportive train guard! 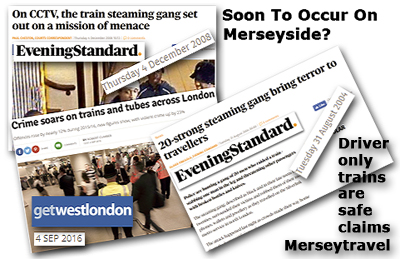 Furthermore, with the increasing levels of sexual attacks on the nation’s trains and the history of ‘steaming’ robberies on trains in London which began when guards were removed from their trains and still continue today, as criminal gangs walked through every train carriage threatening the passengers with assault unless they handed over their mobile phones, wallets and jewellery, and incidents of rapes on London underground; the risk to the Merseyrail network is obvious.

But there is a duty of care which is being ignored here by management – health, safety and welfare of staff.

Knowingly increasing stress levels on staff, surely breaks an employer’s duty of care? Has Merseyrail and/or Merseytravel completed a risk assessment before procuring the new trains?

There is no question that stress levels on drivers will increase as they carry out the duties of two men/women and are having to meet a timetable whilst monitoring CCTV images from numerous train cameras, and that of the platform they arrive on. In addition with the driver being the only person with responsibility for passenger safety, in the event of him/her becoming incapacitated, what happens to the passengers?

In a recent incident at Lime Street station, when the wall in one of the approach tunnels to the station collapsed, the guard on the train was crucial to the safety of the passengers as the line became blocked with boulders and other debris. Safe escape from the trains was supervised by the train guards. 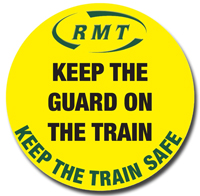 But as is the case with Arriva Buses where the CCTV cameras don’t all function according to drivers and as can be seen by any passenger looking at the monitors on the bus; what will happen in the event, as will undoubtedly happen, when one or several of the CCTV cameras feed stops and the driver has no idea of what is going on behind him and whether or not there is a risk to passenger safety as a result of an incident unfolding or of train doors closing on passengers or the train departing in a manner as to put passenger safety in jeopardy.

Tragically this was the case in 2011 which resulted in the decapitation and death of a young female teenager who fell between the carriages of a moving train at James St Station.

As per usual, health and safety is being ignored and resources cut in order to maximise profit.

It is somewhat disappointing and of concern therefore that a Labour controlled council and a Labour Regional Mayor seem oblivious to the concerns of both the RMT AND the traveling public!

Meanwhile, Ellie Ward, from Merseyside, set up the original petition to keep the guards on Merseyrail trains, on the 38 Degrees website after she was helped by a guard when a man followed her and then another female passenger on the train home.

Ellie’s experience shows why the people of Liverpool need guards to keep them safe. She explains:

"If it wasn’t for the guard being very vigilant and observing what was going on, I wouldn’t know what could have happened to myself or the other lady. Especially due to the past few days where there have been a number of sexual assaults.”

The union for the train workers thinks Merseyrail’s plans are dangerous, and local MP Dan Carden has raised the issue in Westminster, and an Early Day Motion signed by over 20 MPs including one from the DUP and the SNP; has been submitted.

As can be expected, not one Tory MP has signed up to the EDM!

The only voice that’s missing is that of the passengers. If enough of us email the new Liverpool mayor today, we can persuade him to keep the guards and maintain safety.