"These are truly shocking figures and match up with the reports that RMT members are feeding back to the union from the sharp end. They coincide with the drive to de staff our trains and stations in the search for cuts and increased profits.

"Despite union warnings that those cuts would turn our transport services into a playground for thugs, criminals and racists we have been ignored and the consequences are now laid bare. The cuts to staffing on Britain’s transport services have to stop.

"Guards jobs are threatened on Northern, Merseyrail, Southern, Great Western and across the rest ‎of our rail services as private profits are placed before passenger and staff safety. Over 800 safety-critical station jobs face the axe on London Underground in just over a weeks time.

"Today’s figures reveal the true consequences of those actions and RMT will ramp up the fightback industrially and politically in the weeks ahead. "

According to The Guardian, the official figures breakdown:

‘Excluding incidents where the race of the victim was not stated, more than three-quarters of incidents recorded in 2015 involved non-white victims: 36% were perpetrated against black victims, 33% against those of Asian origin, 3% involved mixed-race victims and 3.5% were against those of another race.

Home Office figures show more than 52,000 offences were reported to police in England and Wales in 2014-15, an 18% increase on the previous year. 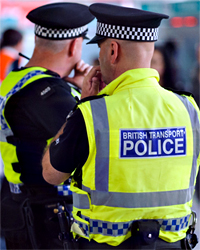 The greatest increase in racially motivated crimes in recent years was against white victims, which now account for 24% of incidents recorded. There were 346 hate crimes involving white victims in 2015 compared with 204 crimes in 2011, which represented 19% of such hate crimes at the time. In 27% of incidents, the race of the victim is not stated by BTP.’

“Only by understanding the true scale and nature of the problem can we hope to develop lasting solutions that will give all travellers and rail staff an environment as free from hate crime as possible,”.

He advised people to report any such crimes immediately. “What is important for people to know is that we care and we will respond,” the spokesman added.