In this impassioned plea, CWU Retired Members Secretary, Graham Wilson argues against the Tory Government’s campaign of pitting generation against generation; and highlights the facts about pensioner’s in the UK today:

Various politicians, think tanks and media commentators have heaped the blame for this government’s shortcomings on older people by suggesting they are the cause of everything from the housing shortage to the lack of hospital beds.

They suggest pensioners have escaped austerity at the expense of the young despite the fact older people are concerned about the the future of their children and grandchildren.

Britain’s State pension is less that £7,000 a year

UK’s State Pension is among the worst in the developed world, ranked 34 out of 36 OECD countries and this Government are continuing to attack pensioners with the media making false claims that most pensioners are well off!

Six million pensioners have an income of less than £11,000 and one in six live below the poverty line.

Remember: the state pension is not a welfare benefit! it is a right! It is the money that working people have paid through National Insurance all their working lives!

UK pensioners need to receive a State Pension of around £200 per week set at 70% of the living wage in order to lift them out of poverty and remove their dependance on welfare handouts.

Many suggest that the Triple Lock is too generous but even with it in place for six years the state pension is still around £60 per week lower than it would have been had the link to earnings not been broken by the Thatcher government in 1980.

Theresa May is suggesting it should be replaced by a double lock. The Triple Lock needs to be maintained so that increases to the State Pension will rise by the higher of earnings, prices or 2.5%. Why is this important? Because it affects not only pensioners today, but will effect your children and grandchildren when they reach retirement age.

Our Social Care system is in crisis with 1.8 million people not getting the care they need and some 141,000 pensioners dying from cold related illnesses in the last five years. Our precious NHS is being starved of adequate funding and threatened by privatisation.

Yet Social Care and the NHS are inextricably linked and the NPC’s view that we need a Health and Social Care Service funded through general taxation and free at the point of need is an idea who’s time has come.

Maintenance of Universal Pensioner Benefits such as free bus travel, a £500 winter fuel allowance, free prescriptions and a free TV licence for the over 75s.

Universal Pensioner Benefits are a thorn in the side of this government and their friends in the right wing press. 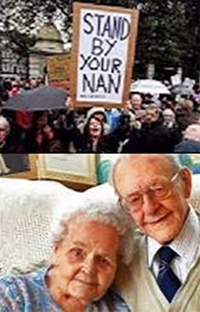 Whilst driving this wedge between the generations both the government and the media ignore the fact that pensioners contribute £40 billion more to the economy by way of taxes, unpaid caring and voluntary work than they take out in pensions, care and benefits.

The Winter Fuel Allowance is designed to combat fuel poverty and would not be necessary were it not for the inadequate state pension.

The free TV licence for the over 75’s combats the loneliness experienced by millions of older, infirm and housebound pensioners. Many say the TV is their only companion.

Free bus travel enables pensioners to remain active and involved in social activities for longer; and without free prescriptions many pensioners would not take the medication they need resulting in more hospital admissions.

Means testing or scrapping these benefits would be a false economy contributing to increased ill health, both physical and mental, among the older population.

More affordable homes that are suitable for everyone and barriers to downsizing that older people face.

Just as pensioners are accused of bed blocking in hospitals so they are blamed for hanging on to large family homes and preventing younger families access to suitable, affordable housing.

Only 2% of the housing stock is constructed with pensioners in mind. Two million older people live in sub-standard homes contributing to their ill health and bringing more pressure on the NHS. Many pensioners are asset rich but income poor.

Surprisingly fewer than 48% of 55 to 64 year olds own their own home outright. There needs to be a greater supply of suitable, affordable home for older people and practical support for those wishing to downsize.

New legal protection for older people from all forms of elder abuse to ensure dignity and raise standards of care.

We regularly hear shocking reports of how some older people are treated in hospitals, care homes and even in their own home. Professional carers as well as family members are responsible. The NPOC is calling for legislation to tackle this issue and a Dignity Code that enshrines in law rights and protection against all forms of elder abuse.

A Brexit deal that safeguards the payment of pensions, the EU health insurance card and the rights of those UK pensioners living abroad.

When we eventually get a Brexit deal it needs to be one that protects the state pensions and its increases for the ex-pats living abroad and their rights in relation to health care are also protected. Additionally there are 80,000 EU workers in our care system. They need to have their employment rights safeguarded.

Other issues of importance to pensioners.

I have used the NPC Pensioners’ Manifesto as the main source for this article.