As the CWU Annual Conference takes place this week with a major debate on male suicides, both tomorrows Workers Memorial Day commemorations and next months Mental Health Awareness Week 2016 from 16-22 May; are thrown into sharp focus.

Suicide is now the biggest killer of men under 45, yet mental health is almost neglected by the NHS around the country with waiting times for counseling being as long as over 12 months in some areas!

Furthermore, this and all elements of mental health, was the subject of a very successful Conference lunch-time fringe meeting held on Monday.

The lack of support for mental health illness which almost 1 in 3 people will suffer from in their lifetimes, is nothing short of scandalous.

No wonder then that, as CWU news reports from Conference, there was strong support for  motion 69 from Great Western Branch which raises the issue of the growing number of suicides amongst men in the UK.

This from the CWU News:

"The motion noted that according to the Campaign Against Living Miserably there were 4,623 male suicides in the UK in 2014, the equivalent of 12 deaths a day.
Marion Brain of Birmingham, Black Country and Worcester declared that mental health is the poor relation in terms of health care.

“There is not enough mental health support. My son was bullied at school. We have to change the culture in society, so those who need the support get it when they need it,” said Marion.

“More and more young people feel suicide is the only option they have. People need to be aware of support services,” said Anne Nicholson, Meridian branch.

Supporting the motion for the NEC, Steve Jones recalled the tragic death of his son who took his own life. “There is not one person in the hall who is not effected by mental health issues, one way or another, said Steve.

It also must be highlighted that workplace stress and pressures can be the cause of suicide and yet the official work-related death figures do not in any shape or form include those who succumb to such pressures and take their own lives. 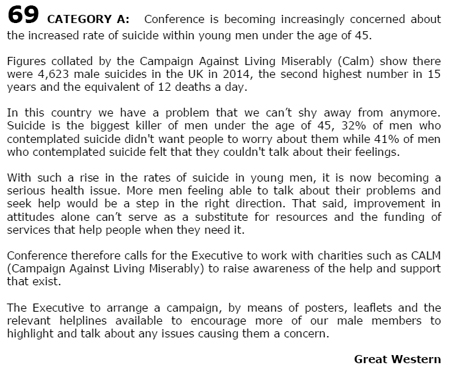