Survivors of domestic abuse are being repeatedly turned away from refuges because they do not meet the criteria to fund their space. Women’s Aid has been working with these women and their children to make sure no woman is turned away.

The No Woman Turned Away (NWTA) project was commissioned by the Department of Communities and Local Government (DCLG) to provide additional support to women facing difficulties accessing a refuge space.

The work was delivered by Women’s Aid and comprised of a team of specialist caseworkers supporting women into refuge alongside dedicated evaluation support to conduct detailed monitoring and analysis of a full year’s worth of data collected on survivors’ needs and system response.

Their report outlines the findings from this project, using data collected from the National Domestic Violence Helpline (NDVH)1 and specialist NWTA caseworkers between 19th January 2016 and 18th January 2017.

It provides evidence that there is a systemic failure by statutory agencies when it comes to responding to the needs of the most vulnerable survivors of domestic abuse, says the introduction to the report. It adds: 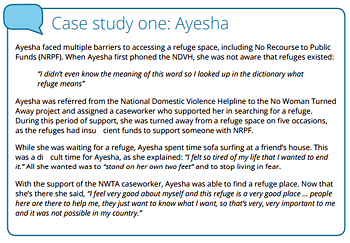 While chronic underfunding is increasing pressure on already overstretched refuge providers, leading to a crisis in refuge provision for the women who most desperately need support.

The executive summary of the report makes for difficult reading to anyone concerned for women’s safety in this country:

During the period of the study, there were 8,623 calls to the NDVH from survivors seeking a refuge space and 404 women were supported by the NWTA caseworkers.

This report also uses data from Routes to Support (formerly UK Refuges Online)2, the Women’s Aid Annual Survey 2016, a survivor survey, and a series of interviews with survivors.

Accessing a refuge space can mark a key stepping stone in the journey away from abuse, but for many women the search for a space is long and difficult.

The report highlights some of the dangerous circumstances that women and their children face when they are unable to access refuge, the inability of services to meet the increasingly complex needs of some of the most marginalised groups of women and an overall national shortfall of refuge spaces, unevenly distributed and facing an uncertain future. 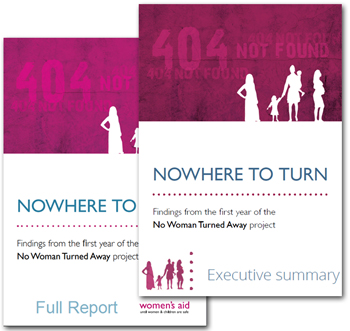 A further 20% stayed with friends and family, 8% stayed put as they did not live with the perpetrator, and 7% were in emergency accommodation. Whilst this meant that these women had accommodation, they did not have access to the support and safety offered by a refuge.

7% of survivors gave up their search for a refuge space and stayed put with the perpetrator.

While searching for a refuge space, 17% of women had to call the police to respond to a further incident and 8% were physically injured by the perpetrator. 11% of women slept rough during this time, of which seven women had children with them and three were pregnant. 40% of women sofa surfed and one woman disclosed that she was sexually assaulted whilst sofa surfing at a family friend’s house.

But the report identifies clear failures which can cause harrowing experiences for fleeing women, and their children: 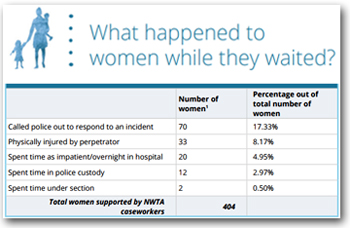 Many women, supported by the NWTA caseworkers, faced structural barriers to accessing safety due to inadequate responses from statutory agencies. The experiences of these women highlight both the difficulties faced by women in seeking help, and the lack of awareness and resource dedicated to domestic abuse within statutory agencies.

Social services failed to meet their duty of care towards 37 of the 115 survivors they supported (32%), 30 of whom were fleeing with children (26%). Several women who were refused help by social services were told that they were not experiencing domestic abuse or that they did not meet the risk threshold for intervention.

The full report and the executive Summary, can be downloaded direct from this website by clicking on the pic above on the relevent report title you want to view and/or print off.

For further information go to the Women’s Aid website here