The Naylor Report – Asset Stripping of NHS Property and Land

Given today is the 69th birthday of the NHS, it is worth reporting once again on an act of terrorism performed against the NHS by this Tory government:

Speaking to Andrew Neil during the general election campaign, Theresa May made it clear that she will implement the Naylor Report on the future of the NHS, but will the DUP support her in this, you may ask? Well, people need to understand that she can do this without any recourse to Parliament!

Whilst Labour continues its justified attacks on the government over the state of the NHS, they and the media continue to totally ignore this aspect of the NHS crisis.

The Naylor Report and its recommendations to asset strip the NHS by forcing all NHS Trusts to sell off their buildings as soon as possible, will be the single biggest act of terrorism against the NHS that has ever been seen and will spell the end of the NHS as we know it. The control of its land, buildings and resources will all be handed over to American healthcare insurance companies – who else will be able to afford to buy this portfolio of NHS resources?

There will even be a ‘buy one hospital building – get one free!’ offer made to private investors and supported to the tune of £10 billion by the government!

This is the figure she gave to Andrew Neil as the amount she will put into the NHS for their buildings aka capital investment, which is incidentally the cost of asset stripping according to the Naylor Report!

The ease at which this can be done was facilitated well in advance by the Tories in 2013 when they set up a limited company called NHS Property Services giving them ownership of some 3,600 hospital buildings. NHSPS is owned by the Dept of Health.

Of course this followed the passing of the Health and Social Care Act in 2012, the abolition of the Primary Care Trusts and Strategic Health Authorities, and the subsequent creation of GP led Commissioning Groups (CCGs). 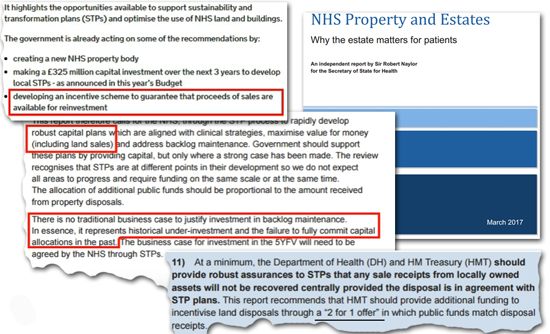 All assets not transferred to the CCGs were then given to the NHS Property Services limited company which administers them on behalf of the Dept of Health.

NHS Property Services has only two members of their management team, one of whom is the CEO of the NHS: Simon Stevens. He was previously in charge of the European arm of the 6th biggest private healthcare companies in the USA, United Health.

So the man in  charge of both the NHS AND who administers over 3,600 NHS properties has total control of England’s NHS!

Following the General Election and the return of a Tory government, he will be responsible for instigating the Naylor Report which the Government via Mrs May told Andrew Neil, they fully support and will implement.

What she did not say was that the £10 billion is being put in by the government to prepare the NHS property to be sold off to private companies which then means the NHS does not own it’s own hospitals and will have to lease them back from the new private owners, with no control over the costs and no doubt increasing costs that will incur forever!

The Naylor Report also makes it clear that maintenance of any buildings should be stopped prior to them being sold!

The asset stripping of the NHS into private hands will begin urgently in order to then facilitate the wholesale transfer of the NHS into the hands of American healthcare companies, United Health being one of the main benefactors. A great gift from Simon Steven’s to his previous employers!

Those NHS Trusts who are skint will grab this opportunity to balance their books by selling off as cheaply as possible, their buildings and other assets. In the meantime those not wishing to sell off their assets will be refused further funding!

Finally, none of this is being hidden, but it IS being ignored by the media, and for some strange reason by Labour too!