Our Post Office members face a fight for their futures, says the CWU. Today, (14th September) the union’s General Secretary, Dave Ward writes for The Guardian.

CWU has secured wide ranging media coverage and support for its Post Office members, and Dave’s article is a key plank of the CWU’s communications strategy as it allows Dave the space to set out our vision as well as key arguments in this dispute.

"This Thursday, thousands of Communication Workers Union members will go on strike from the Post Office in a dispute over job losses, the closure of their pension scheme and the very future of the industry.

While the scale of what our members are fighting is stark – with 2,000 job losses this year alone – the truth is that over the past five years they have endured a relentless programme of cuts and closures and the Post Office has become a case study in the limitations of austerity-era thinking."

And so begins Dave’s analysis of what is truly happening to the once key-stone of most communities across the UK.

In his article Dave accurately portrays and employer hell-bent on running the service down, concentrating on profits rather than service to it’s customer’s and the communities in which it resides, whilst cutting the pay and terms of conditions for the workforce. 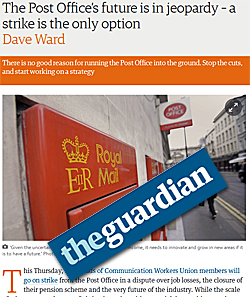 " While the Post Office faced the challenges of being separated from the profitable mail business, the government also decided to start systematically scaling back the Post Office’s public funding. With no strategy to grow its revenues, the cost-cutting has had predictable results.

Take the flagship Crown post offices as an example. In 2014 there were more than 370 of these branches across the UK in prominent high-street locations. They are the largest offices, with highly trained staff, and are perfectly positioned to make it a major player in banking and other services. But instead of modernisation, we have seen the decimation of this part of the network.

By the end of the year the Post Office will have closed down more than 100 of these branches, with more likely to follow. Services have been outsourced to retailers such as WH Smith, which has installed a Post Office counter at the back of some of its stores. For the public this means a significantly worse service and the loss of a community asset – and for staff the impact is equally dire."

" These retailers don’t want to match the terms and conditions the Post Office has paid its employees – and the income the Post Office counter offers the retailers wouldn’t cover this even if they did. So the Post Office is using tens of millions of pounds to pay off long-serving staff to leave, so they can be replaced with part-time workers on the minimum wage.

The Post Office points to its profit margin and a reduction in public funding to justify this. But here’s the crux of the issue: having received £2bn from the government over seven years, it’s not unreasonable to expect the board of the company to have come up with more than a glorified closure programme that delivers savings in the short term. Given the uncertainty over the Post Office’s traditional income, it needs to innovate and grow in new areas if it is to have a future."

Echoing the situation in many British businesses it seems to Dave, is the only answer to why the Post Office is being run in the name of profit only rather than as a modern business flourishing with new ideas, diversification, broader customer service delivery and as a result growth and profit and offering good pay and conditions of service.

"…..our Post Office not only lacks any positive strategy for the future, it is also adopting the worst practices of British business towards its staff. Perhaps taking Philip Green as its inspiration, it is seeking to close part of its pension plan and telling staff the benefits they have built up are at risk. This is despite it being the best-funded scheme in the country and having a surplus of over £130m.

Or perhaps it’s looking to model itself on Sport Direct. Faced with the current industrial dispute, the Post Office is victimising trade union representatives by threatening them with compulsory redundancy and offering staff payments of £3,000 and upwards not to go on strike."

Dave’s conclusion is stark, and makes it clear that only the CWU seems to care for the future of the Post Office and it’s once cohesive support for communities far and wide and for it’s customers young and old.

Diversity of service is the key he argues, but the PO management and the Government don’t seem to have a clue on how to put the Post Office back together again:

"The government must recognise that the Post Office is in urgent need of new thinking. Our members striking this Thursday have a simple demand: we want a pause in the current cuts and a proper series of talks with the government and the Post Office, to formulate a strategy that will safeguard it for the future. The government has talked about having an industrial strategy for this country. It’s time for it to show that it’s serious."

You can read the complete article written by Dave here