The Pride Of The CWU – CWUHA Christmas Card Appeal

The CWU has a proud name in supporting it’s ground breaking Trade Union based charity – the CWU Humanitarian Aid – which started convoys taking equipment. clothing and even building material out to some of the World’s poorest countries and communities, before most others.

What makes CWUHA unique, however, is it’s cardinal principle – volunteers actually deliver the aid to the places where it is needed most. This way, Donors can therefore be confident that their generosity will be translated into aid at the point of need!

It all started in the North West with our Regional Secretary Carl Webb and  other CWU Branch officers way back in 1995, in response to an appeal from trade unionists living in War torn Bosnia, in particular the town of Tuzla.

The first convoy arrived in Tuzla in July 1995. The determination to deliver the aid direct to those who needed it most, cutting out the risk of it falling into the hands of self-interest middlemen, set the agenda for every CWUHA convoy that was to follow.

Our General Secretary, Dave Ward is fully behind the CWUHA and has just issued this letter to all CWU branches (LTB603/17) regarding the CWUHA Christmas appeal and especially this year’s CWUHA Christmas cards:

The purpose of this LTB is to inform Branches that the Union’s charity, CWUHA has, this year, commissioned a special Christmas card for the purpose of fundraising for their various projects in Eastern Europe, Africa and the UK.

The cards are priced at £10 per pack of ten and the proceeds will go towards the charity’s 2018 projects, which include the continued funding of teachers and pupils for the CWUHA supported school in Tanzania; phase 2 of the Phoenix Centre Project for disabled children; our third annual football tournament for disadvantaged children; the refurbishment of a rundown children’s hospital ward and furnishing bedrooms and supplying sports equipment for a large orphanage in Moldova that cares for 500 children. 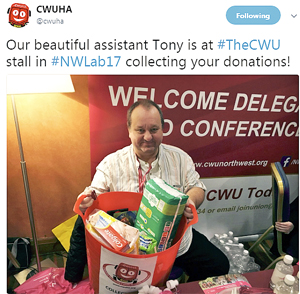 In addition the CWUHA will be looking at ways to continue their support for Syrian refugees and offering holidays of a lifetime to underprivileged children.

The CWUHA projects require continued financial assistance and they rely on the generosity of branches and their members. I would urge all branches to affiliate to the CWUHA and encourage you and your members to affiliate as individuals. Please see the attached affiliation forms.

The Charity would like to thank and credit David Gibbon from the Durham County Amal Branch for the amazing photo of an artic fox and the CWU Communications Department for designing and producing the card.

If you wish to support the CWU Humanitarian Aid by placing an order for some of these cards, please contact Trish Vollans at trish.vollans@openreach.co.uk or Carl Webb at northwestregion@cwu.org

You can also visit the CWUHA website to see just how much work the charity does and to download affiliation forms for you and/or your branch to support the chairity all year round.